Today dawned with with a scene familiar to anyone who has camped in Scotland at this time of year. It is not the wind or rain that can dominate camping- it’s the midges , Scottish midges are in a class of their own. They can reduce grown men to tears and anyone to near insanity. It is not just the bites- they come in clouds and crawl over your eyelids and into your ears and nose. They can supposedly detect heat and carbon dioxide given off by people and are attracted to them, certainly this morning although the field had some midges,  around the tent there was a visible cloud and they had collected under the flysheet awaiting their breakfast.

The classical Scottish camping scenario ensued- the tussle between a full bladder and the prospect of facing the hungry beasties outside. When we looked out and saw them crawling all over the tent flysheet there was a comment reminiscent of a scene in Zulu with Michael Caine-  “ Zulus Sir, thousands of them”  but without the cockney accent and with more expletives . 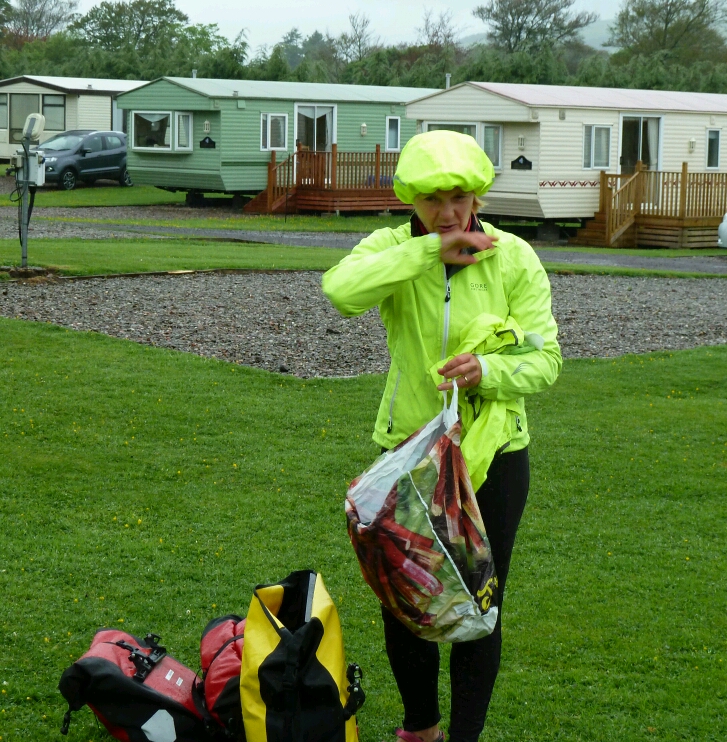 Gayle fighting midges in the rain

The needs of nature won as usual and we smothered ourselves in Avon Skin so soft – the secret weapon adopted by the SAS against the fearsome midge in preference to DEET- which works but repels humans as well as midges.

After another proper breakfast courtesy of Glynne and Sue we set off in the rain , but in fact we had a great days cycling- 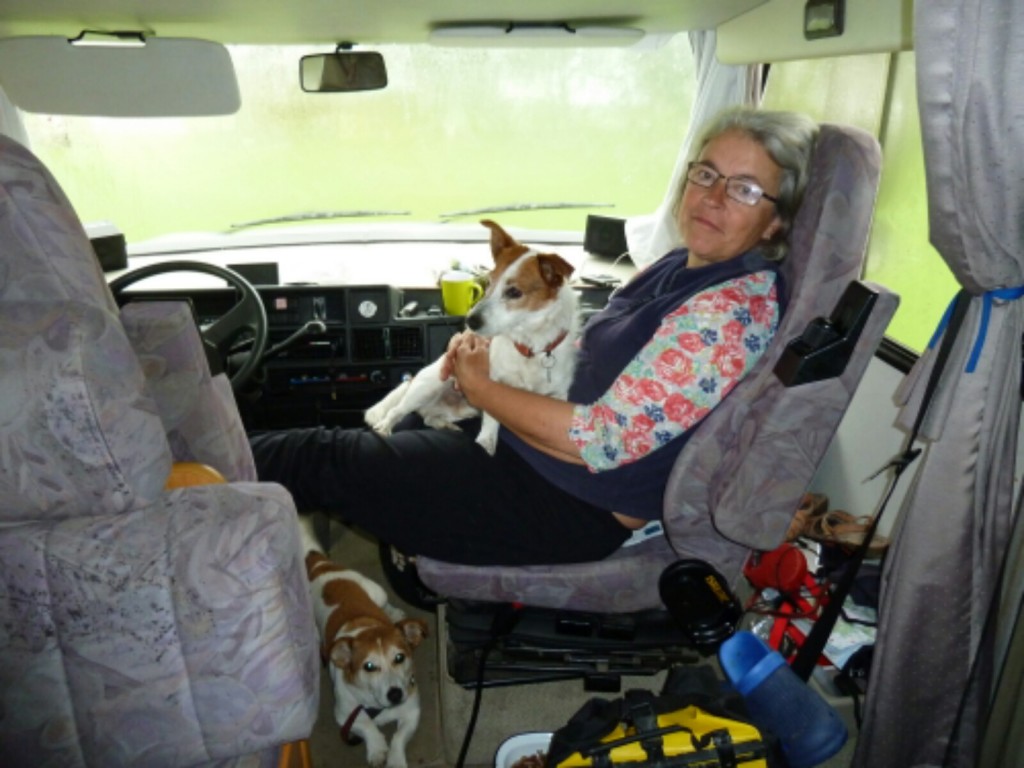 Sue and the dogs in the van 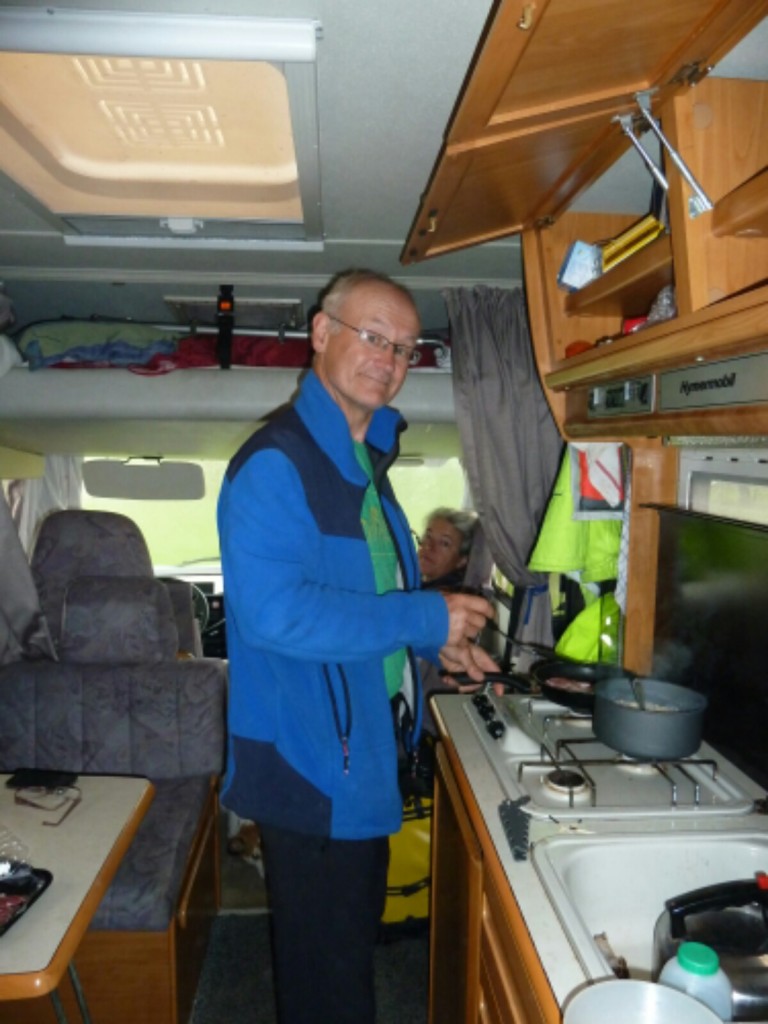 Glynne joined us for the morning and the A road was quiet but had a silky smooth surface making cycling fast  and easy and the scenary lovely as the mist draped itself around the hills. 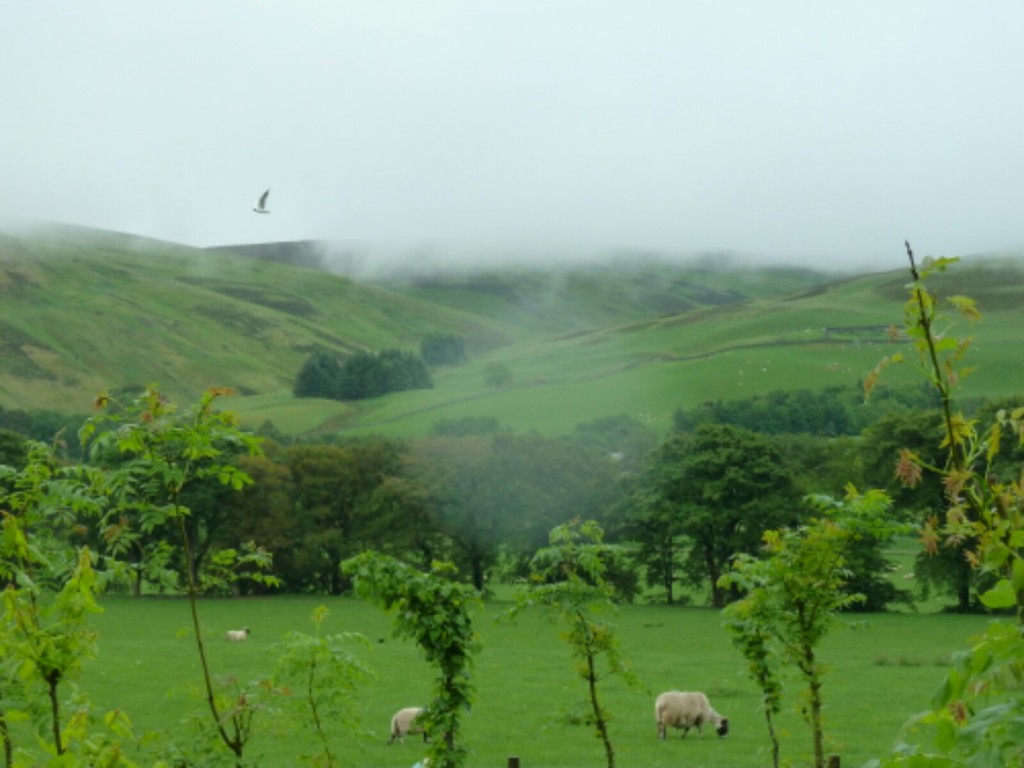 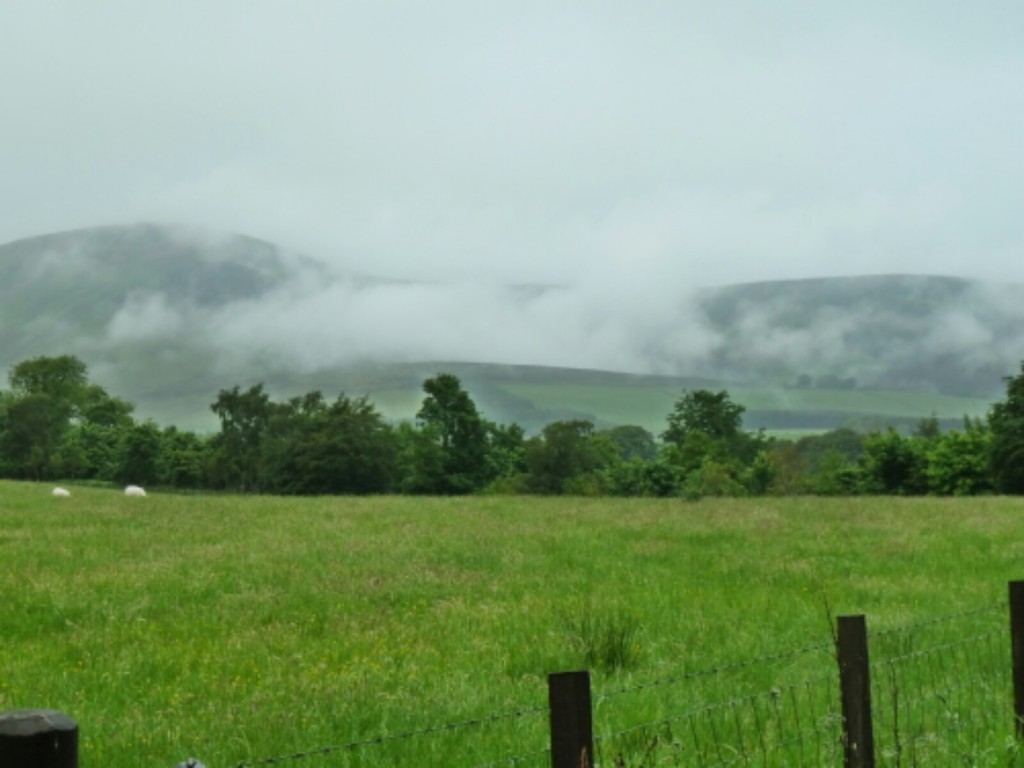 We passed a lonely figure walking in the opposite direction in the rain- he was an American who was walking from John O Groats to Lands End- cycling feels quite hard work but walking the route would be much harder- in fact this was his third time, he had also walked across the United States – defies the imagination. 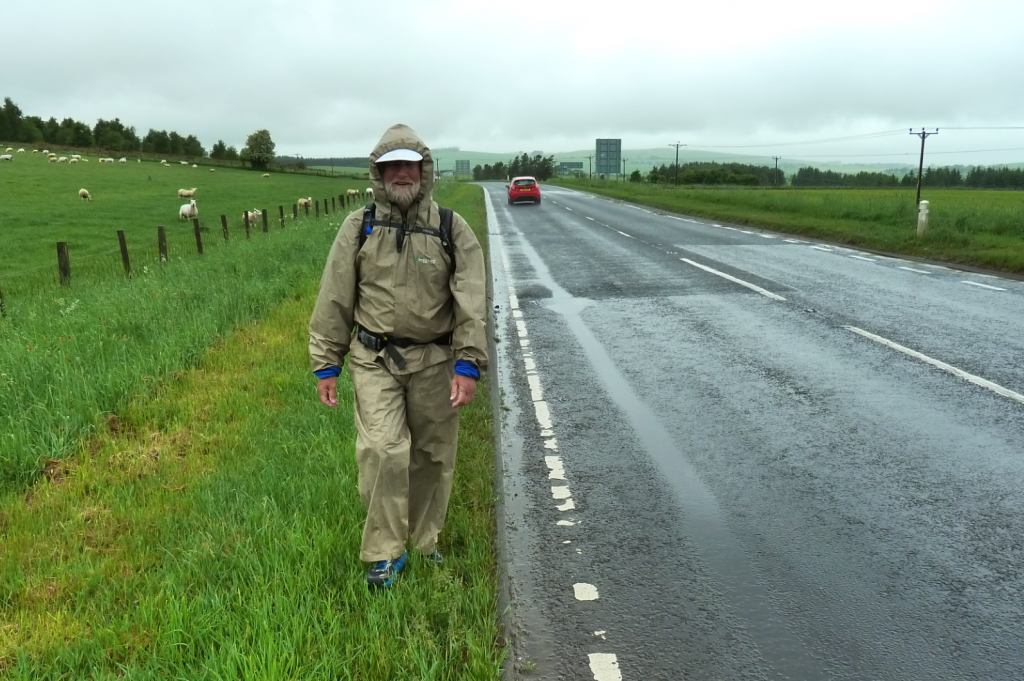 You’ve got to be hardy

We made good progress to Carnwath where the award winning Apple Pie Bakery provided excellent sustenance. We passed the intriguingly named village of Quothquan- Scrabble anyone? 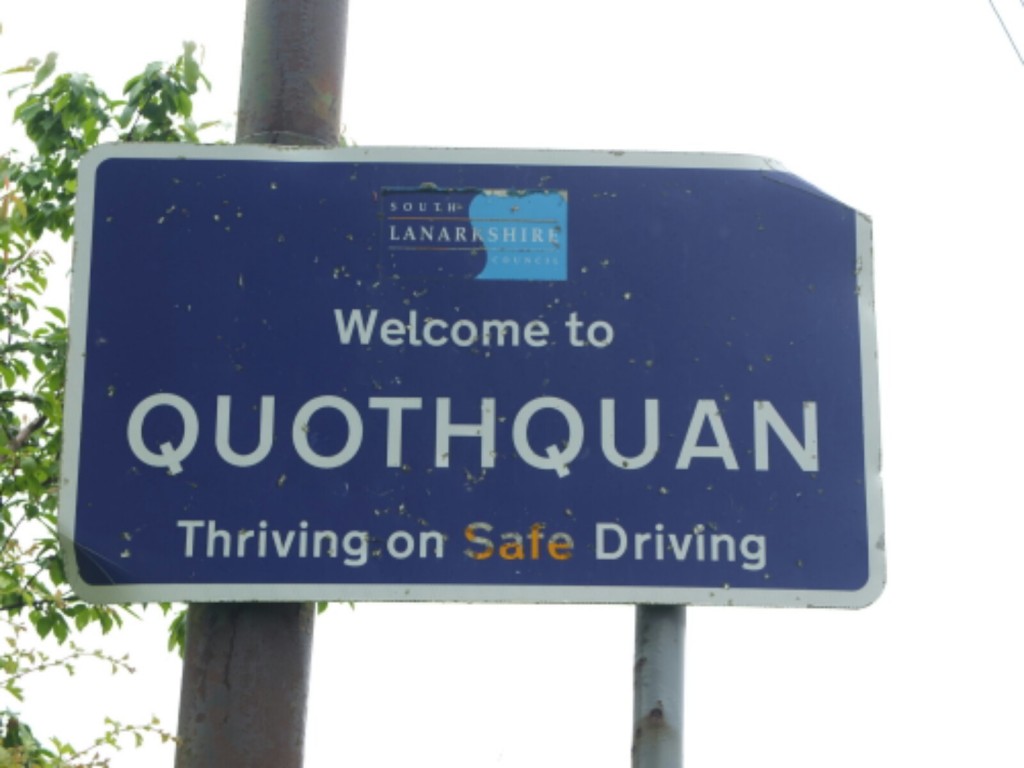 On a treble word score? 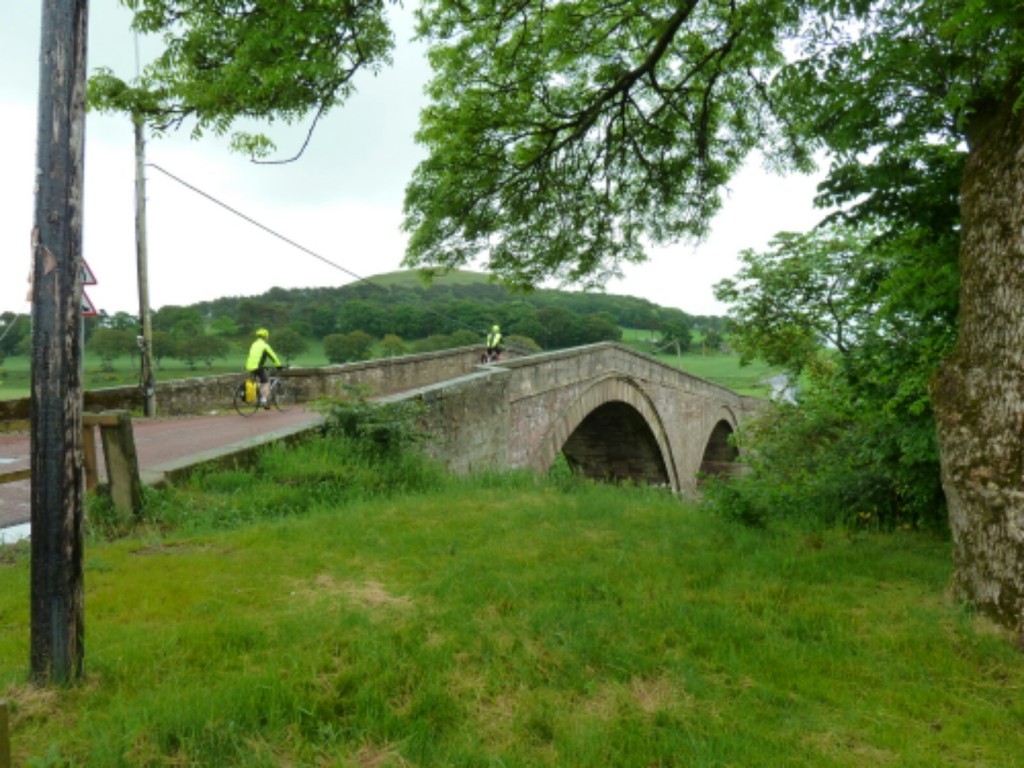 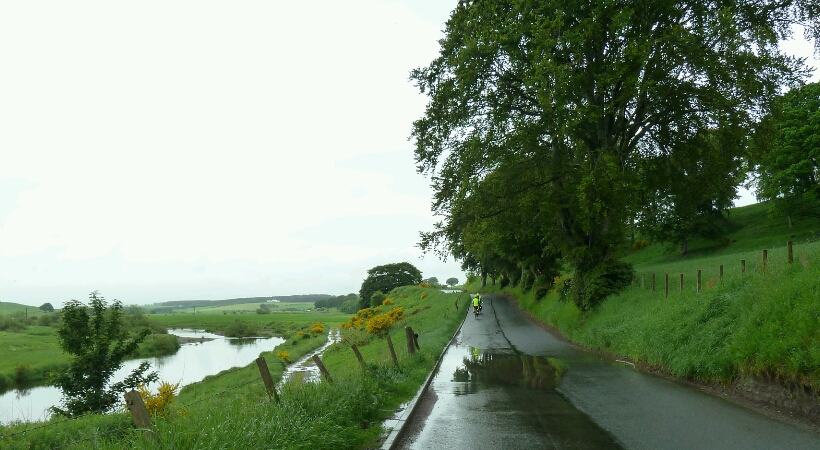 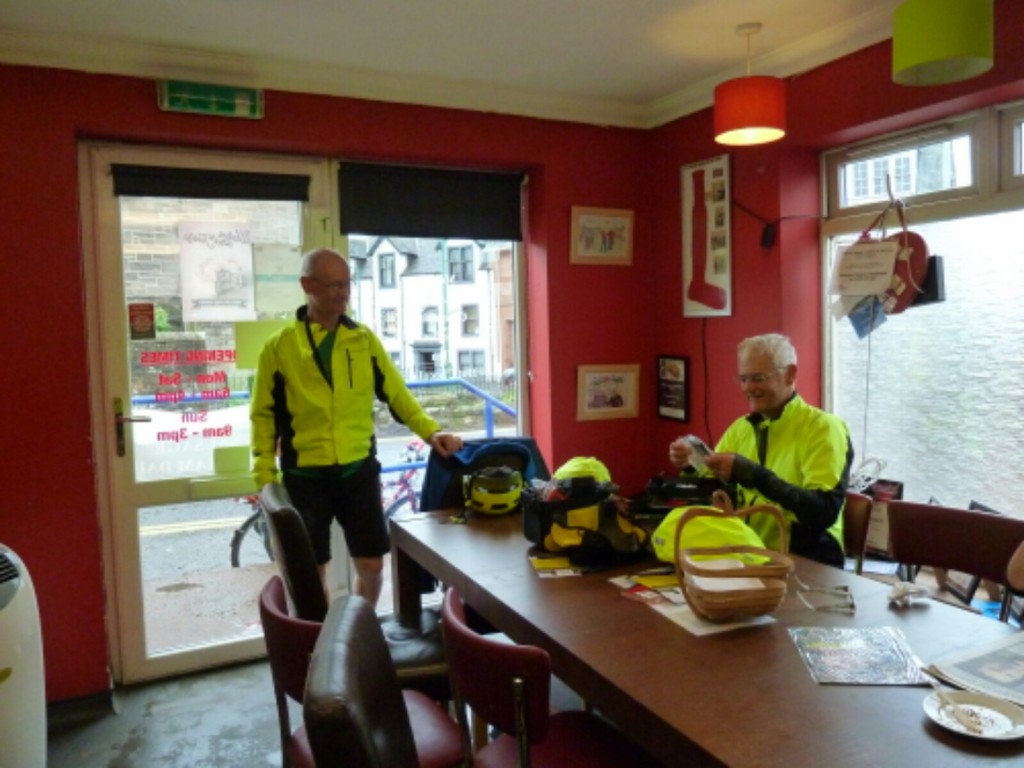 Glynne and Martin , lunch at the Apple Pie Bakery Carnwath 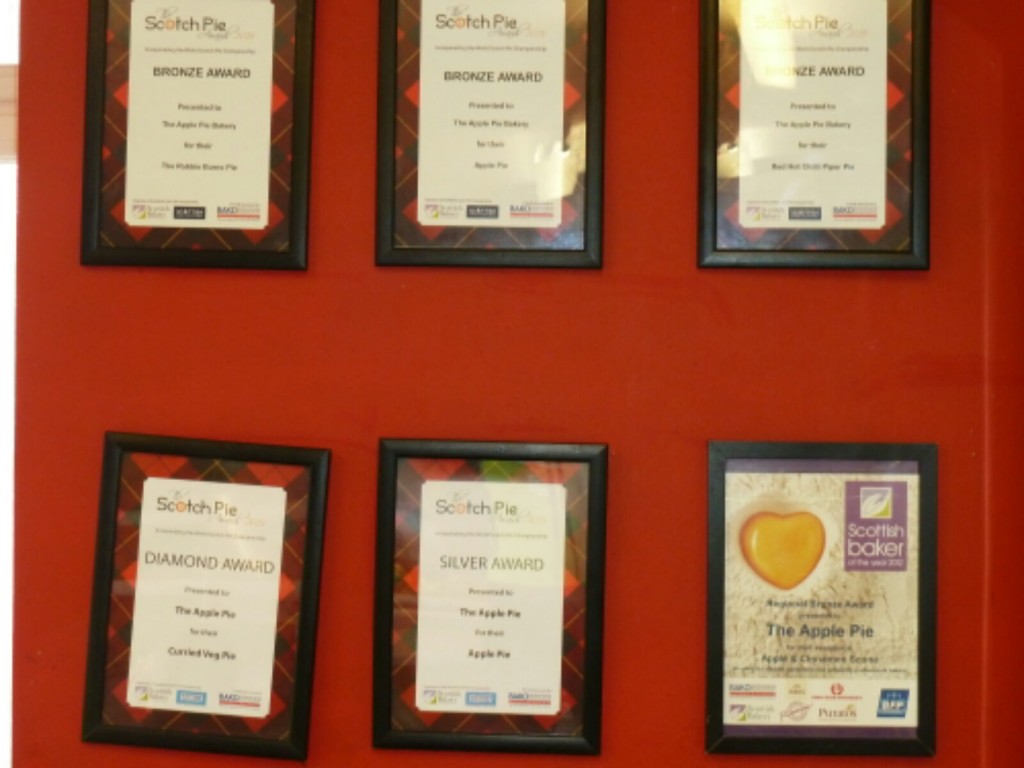 Along the way we met a Scots trio doing John o’Groats to Lands End,  they were travelling light and explained that they were doing “a tour of the Premier Inns of Britain”. Going up hill sometimes we see the attraction of this approach.

In the afternoon Sue joined us and we pressed on and the route became a bit more up and down (“lumpy” in cycling parlance) as we crossed the Pentland Hills.   We passed through the tiny habitation of Woolfords that was offering coffee in the tiny village hall but we were fresh from our lunch and didn’t stop, however half a mile further on Gayle noticed a distraught lamb stuck up to its shoulders in a boggy ditch in the middle of a peat bog-  inaccesible. Gayle cycled back the village hall where they knew who the farmer was and soon called for help to rescue the poor thing. 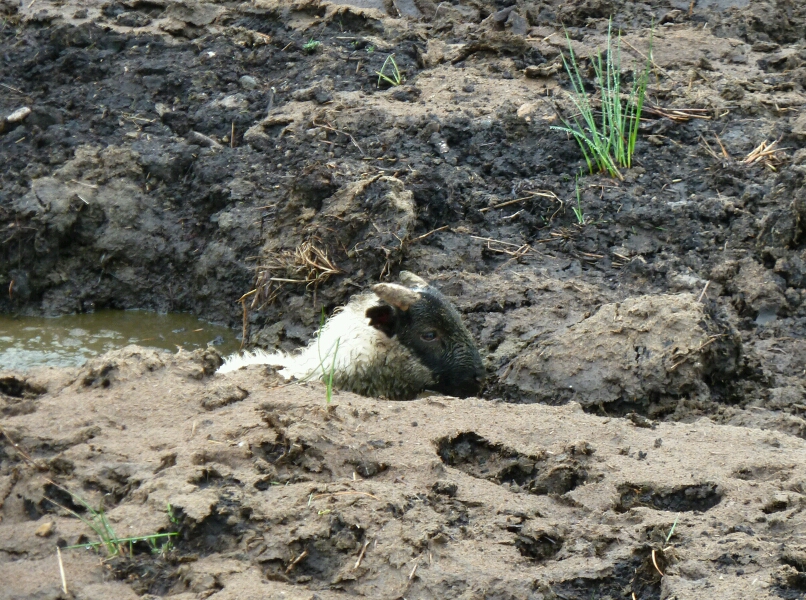 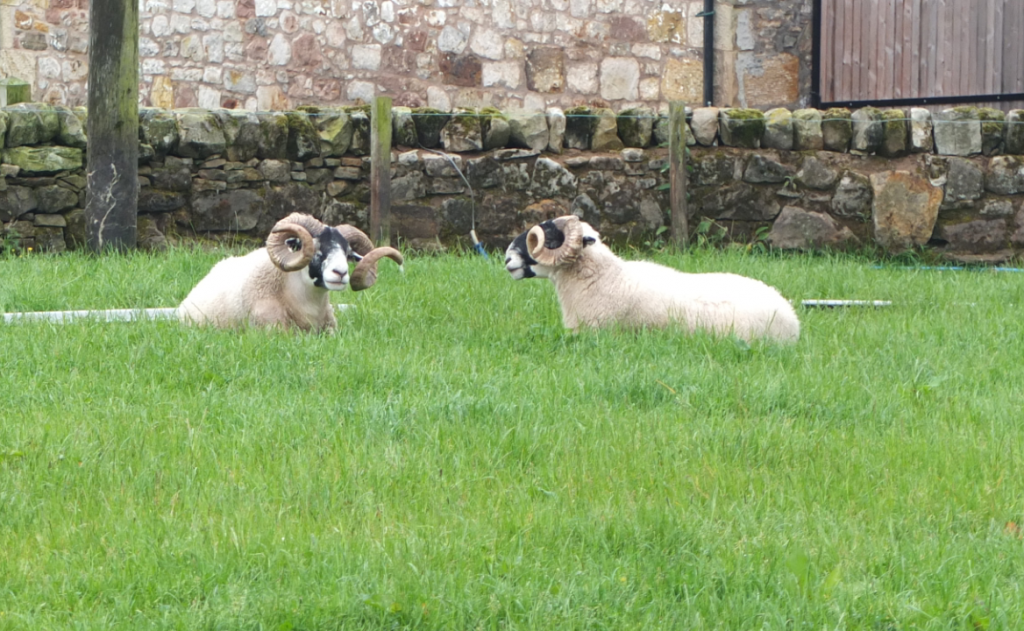 Rams gathering their strength for the Autumn 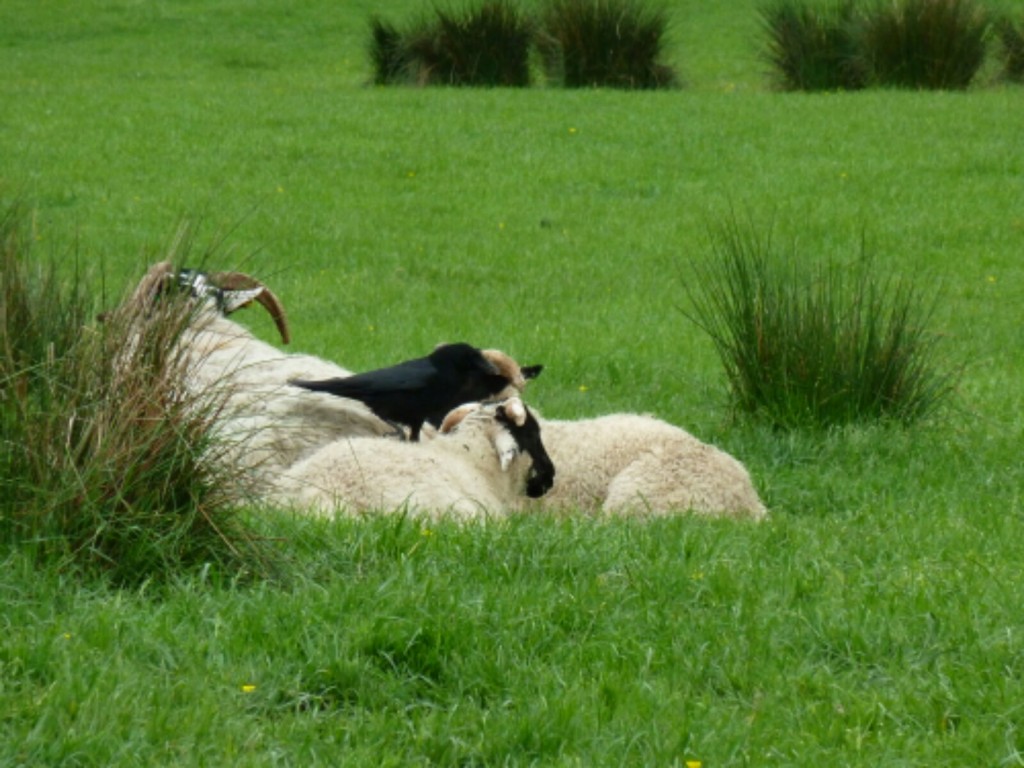 A crow eating insects off a lanb

We then entered the low cloud and passed a series of wind turbines- quite eerily beautiful disapearing up into the mist. 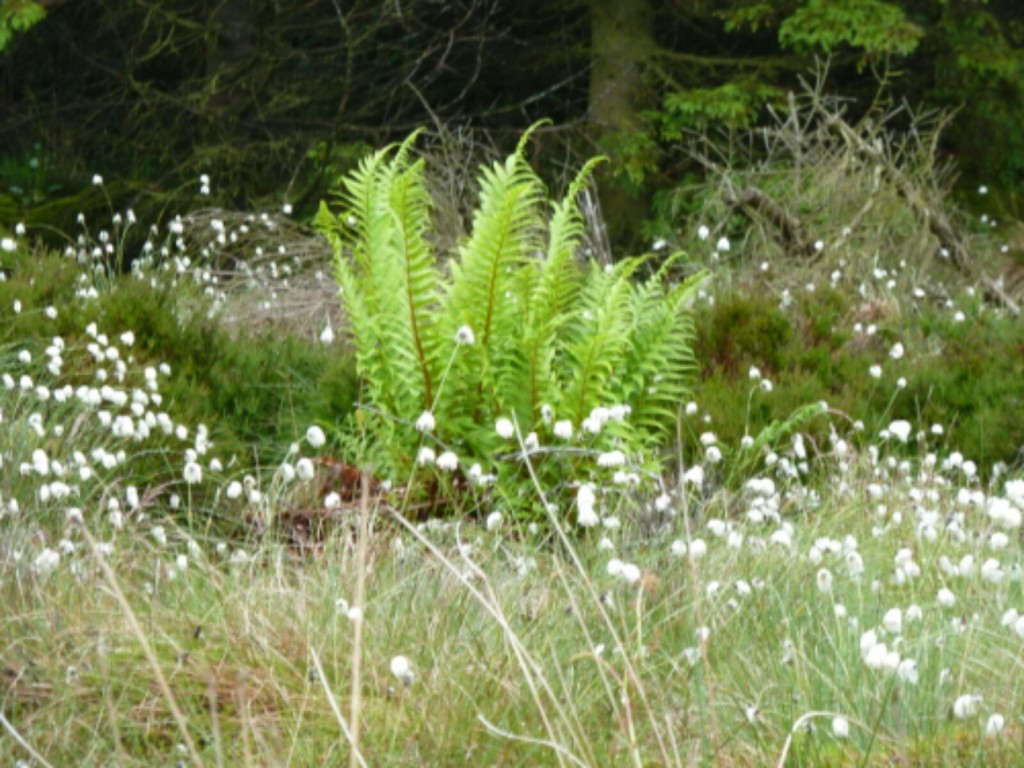 We passed through the new town of Livingston, a sprawling town but with an excellent series of cycle ways avoiding busy roads and taking us through extensive green spaces. There was then the hardest part of the day up some fairly steep climbs towards the campsite- Beecraigs country park, a mountain biking centre with a very well equipped campsite . 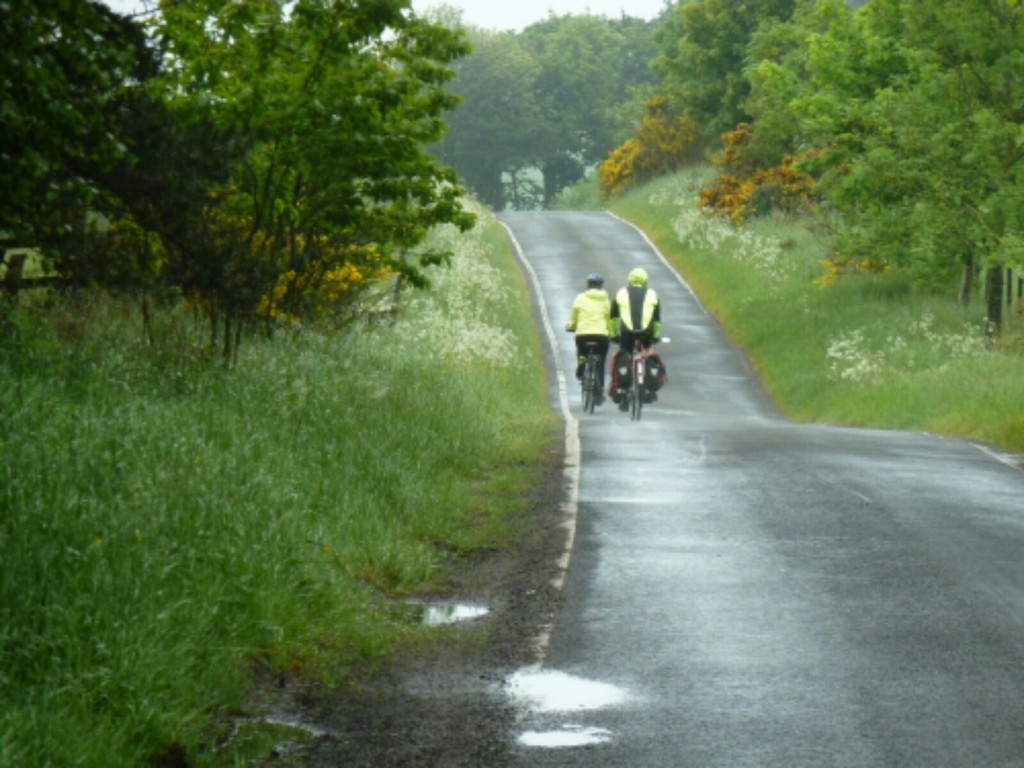 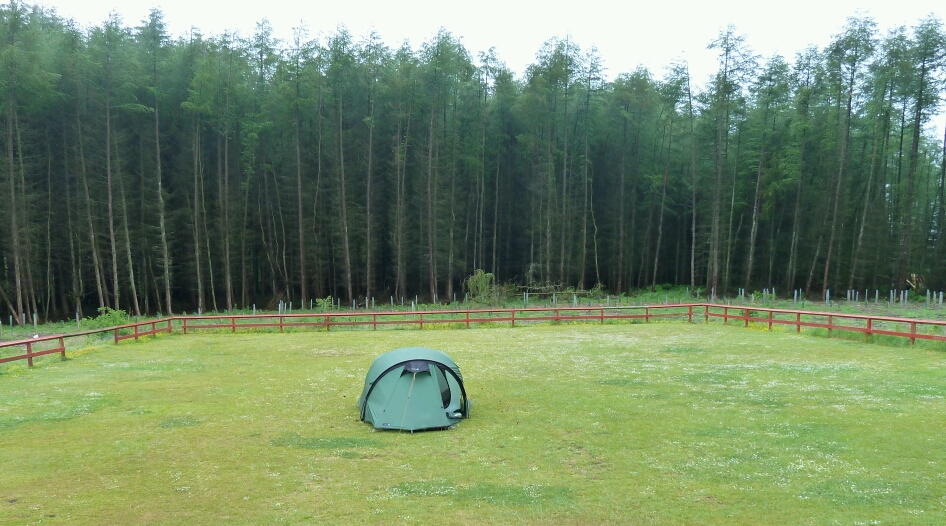 Camped at Beecraigs, as far as possoble from midgey grass

And so a final evening being looked after and fed by Glynne and Sue , tomorrow we were planning on a rest day but in fact after the last couple of days with them we feel refreshed and will defer the rest day and press on to Perth.

We didn’t manage to post last night as there was no mobile signal,  I think the radio waves couldn’t get through the mist