Through the Limousin and the Auvergne

Through the Limousin Park and the Auvergne

Tuesday 13th we managed to leave early, getting up into dark at 6.30 and taking the tent down by torchlight.  Bought breakfast and lunch food at the tiny epicerie in St Hilaire Le Chateau.  A long climb up the to the Limousin plateau along a tiny Road through mature forests and golden fields.  Very hot once the sun had been up for a bit. There was a market in Royère de Vassivière small, local produce and we sat and enjoyed goat’s cheese and apricots and people watching.  A French cycle tourist arrived bravely cycling a very battered bike with makeshift saddle bags…  made us feel a bit wimpish.

Then on over the Limousin plateau.  There are similar plants to Scotland: rowan. silver birch,  pine, heathery and gorse but very dry, no moss or ferns.  Lovely golden brown cattle and big lakes, we had lunch by one.

At 900 metres we reached the top of the plateau and the watershed between the Loire and the Dordogne ad plunged down to Sardon, a small town with a nice campsite which was unfortunately closed. The forecast wad for rain and with no alternative campsites nearby we resorted to a Chambre d’hôte with a couple who had retired here from the Champagne region in the North and were finding it hard to integrate. They were very kind to us but it was clear that we needed to avoid talking politics..

The next day was pouring and rained all day. We pottered down a pretty valley to Ussel and then along a road which was busier than we liked to Bort les Orgues, on a lake and getting it’s name from the basalt columns like organ pipes.  We were soaked and spent the night in a small village called Champ sur Tarentaine in Chambers d’hôte with a really lovely family, he was a farmer with 38 cows and househusband living on an old family farmhouse and making ends meet by the B&B and her job as an agricultural reporter.  We joined him for a beer and heard all about the difficulties for small farmers using traditional methods trying to compete with large farms.  He clearly loves living in the Auvergne and told us about local dishes and traditions.

We went for an amazing meal in a small auberge 2km up the valley,  offered us the use of his car but we opted to cycle,  luckily avoiding the deluge that followed shortly after

The auberge had a very rustic feel but clearly took food very seriously,  all the dishes were local recipes,  including a starter called pounti with prunes,  delicious. Locally sourced meat from Limousin cows and a selection of very local cheeses followed. Overall it was the best restaurant meal we had had in many years. 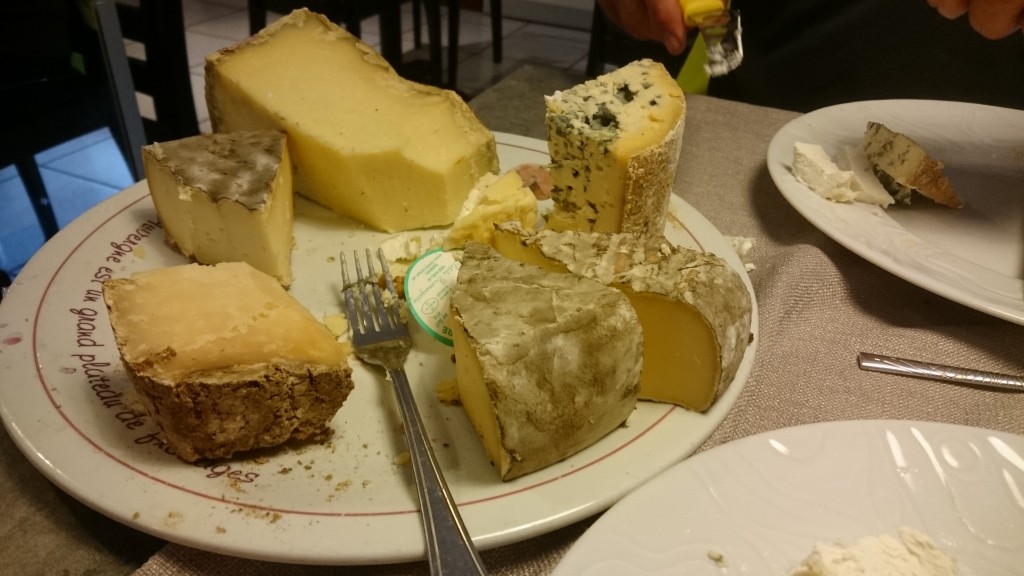 Afterwards we cycled back up the steep hill feeling very replete

Slept in the next day and chatted to Emmanuel over breakfast and then pottered off for a shortish day up the Gorges de la Rhue and through Rioms es Montagnes to Le Claux, w tiny hamlet at 1100 metres on the Auvergne plateau. 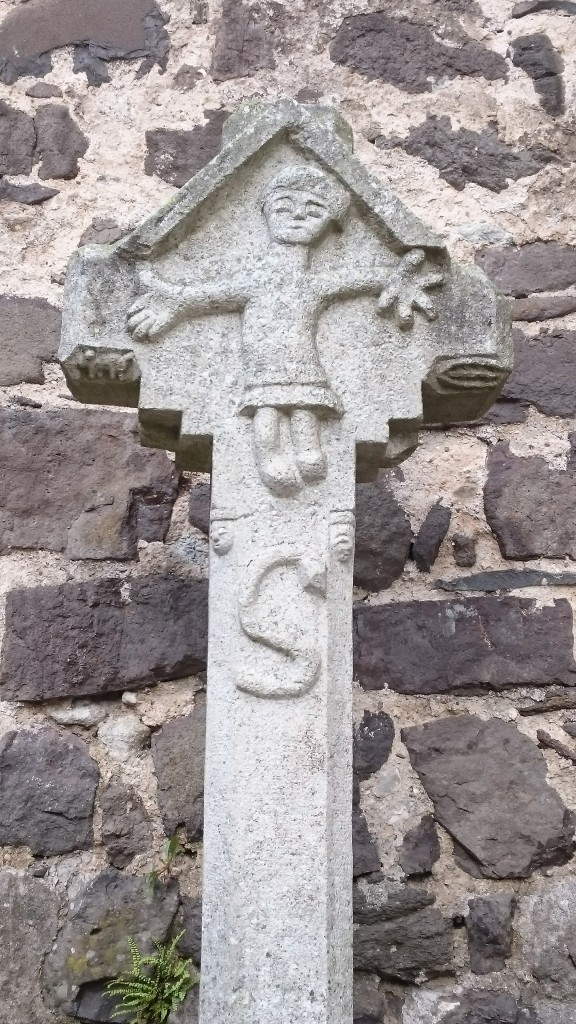 Camped at the Camping Municipal,  wonderful rainbow and then rain overnight. Noisy night with dogs Barking and some large animal running around the campsite…  hopefully just deer. 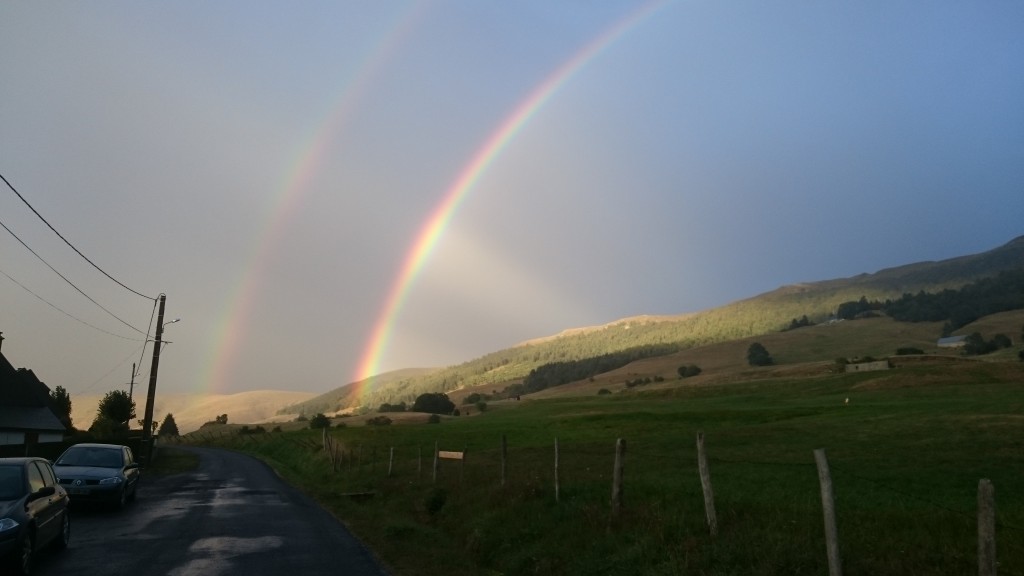 This morning, Friday we did a getting up by torchlight start. Lovely sunny morning and we pedalled up Puy Mary,  an iconic Auvergne mountain with a beautiful dramatic shape and a lovely approach along la Route des Crêtes. We stopped on top and climbed the last 200 metres to the top. Wonderful views along the ridges and crags made more dramatic by rapidly approaching weather.  Swifts in large numbers and crows. 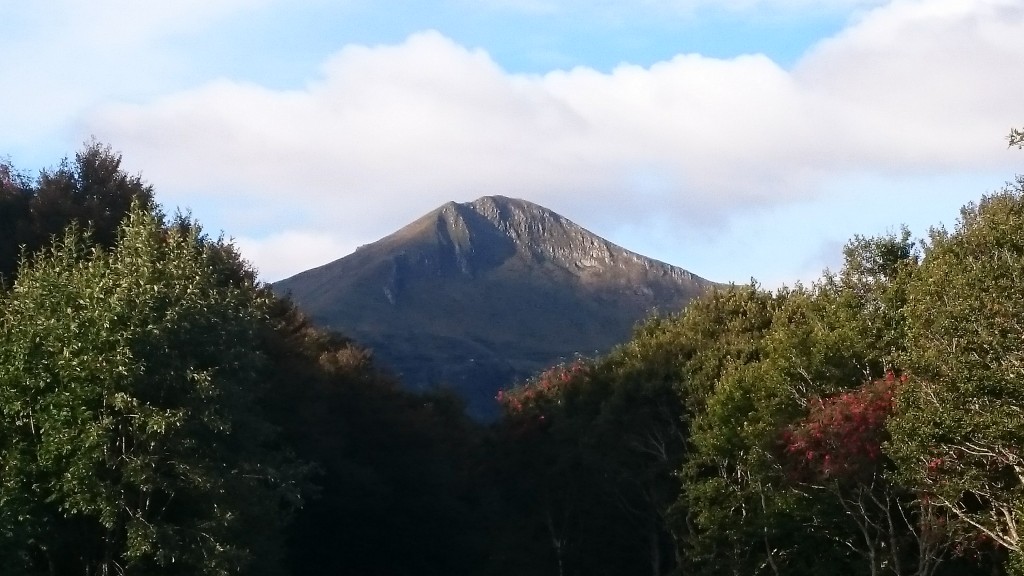 Then a swooping descent and Le menu proved very tempting in the Hotel des Genets in the small village of Mandailles…  more pounti and truffade.

2 thoughts on “Through the Limousin and the Auvergne”