In fact we aim to have access to the web as we go along , we need to look for campsites for the next night, update this blog and keep in touch with family and friends . We also use GPS technology for navigation and need to be able to plan changes to the route as we go along.

Martin has had a Garmin Edge 800 for about 5 years and it is still going strong. The interface is not immediately intuitive and even now I find new features but it has been stable and reliable. Gayle has a Garmin 810, an updated version of the 800, it has some new features such as Bluetooth link to a phone but in fact we haven’t used these. It has been a bit less stable with some system crashes when following a route.

Both devices can upload routes  created on  Garmin’s  own Connect website but  we tend to use an alternative site BikeHike and manually load a gpx file onto the device.

In recent years we have stopped using paper maps and moved to using a 7 inch tablet that can sit comfortably on the front bar bag in a map case- on long tours in France it allows you to have detailed street level mapping for offline use in something the same size as a single OS map. The fantastic open source OpenStreetMap provides all of this for free although we did pay a small amount for the OsmAnd android app (a free version is also available if you only want a couple of countries). Our planned route can be added onto the map. 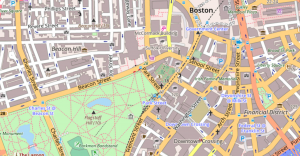