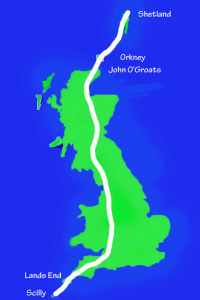 The traditional “End to End” of the UK is from Lands End in Cornwall to John O’Groats in Northern Scotland (often shortened to LeJog).

We plan to stick to more interesting smaller roads and cycle paths , a bit slower but more enjoyable.

We anticipate doing about 1400 miles  in total including the  6  ferry trips, about 1200 miles of actual cycling

We have been helped enormously by people who have been there before us and helped in planning our route, particularly Steve Bright and others at the Spire club in Chesterfield .

We have also used a book  by Royston Wood- click on the book below for the link, we have altered the route to allow us to visit several friends on the way- anything for a hot shower!