We started the day fully refreshed and Martin fully recovered, Chris and Cas looked after us and we talked late into the evening . This morning we had a tour around their estate, a wildlife oasis but also very productive, full of fruit bushes, trees and vegetables. On their birdfeeder there was a Greater Spotted Woodpecker which they thought was completely normal, they also have red squirrels in the garden . 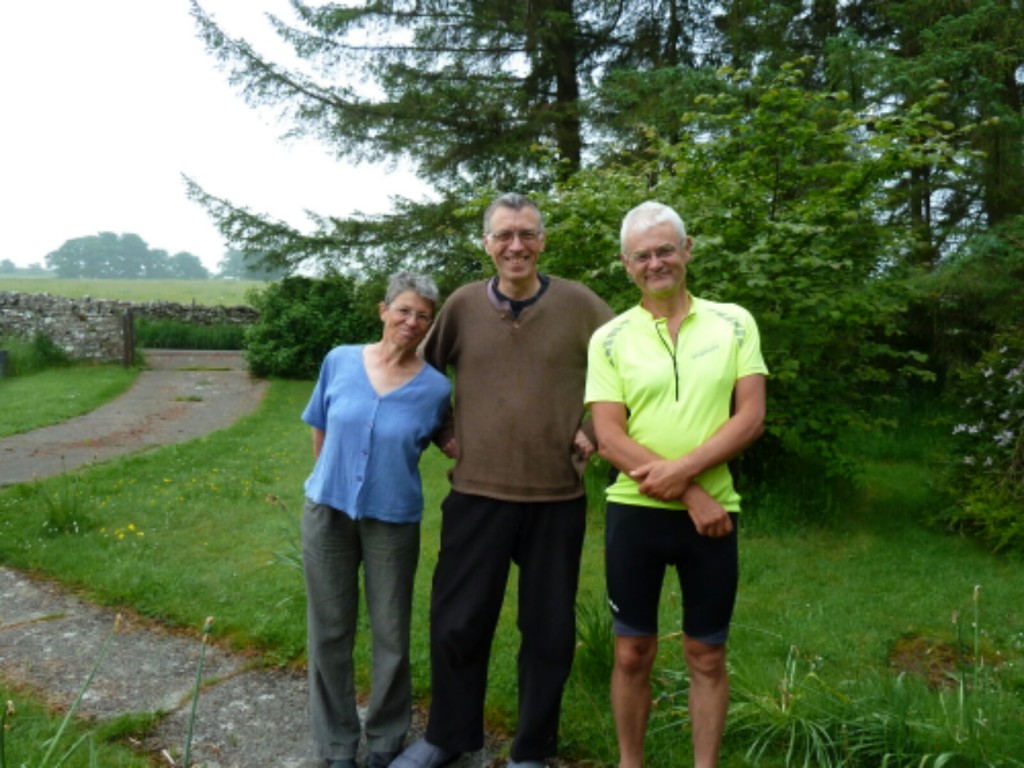 With Chris and Cas 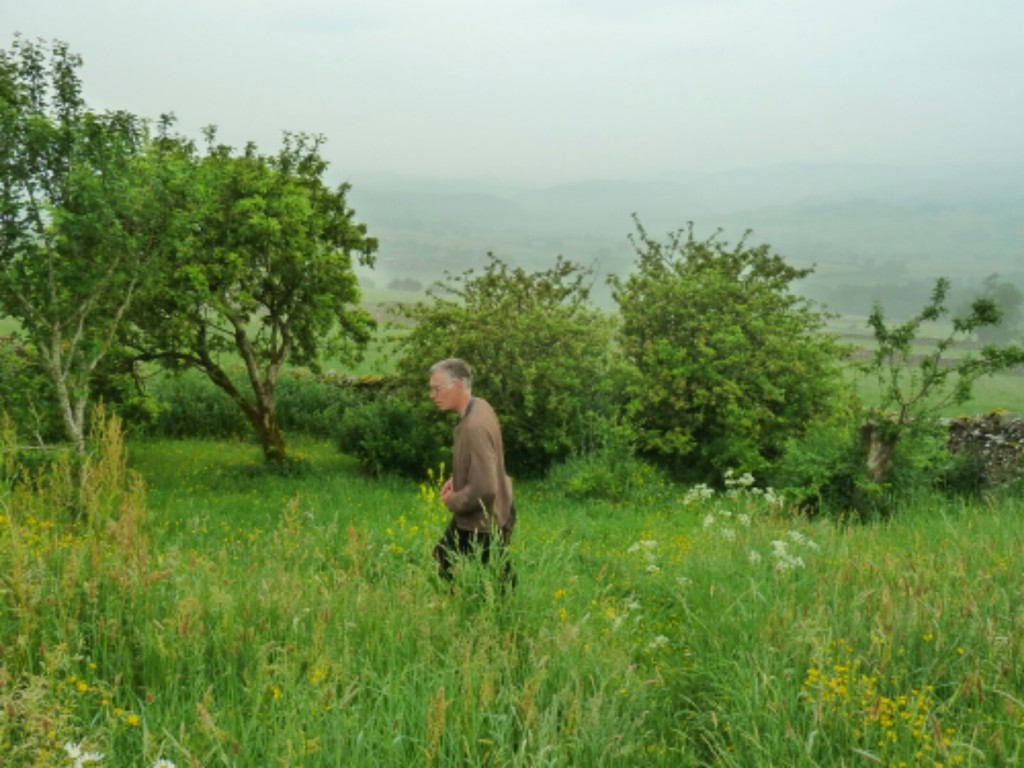 Chris in the garden

We set off and had quite a relaxed day- all of the height gained yesterday climbing Shap meant we had lots of downhill and flat sections. After a few miles we met up with Glynne and Sue , Martin’s brother and sister in law who have joined us for a few days , taking turns cycling with us and driving their venerable camper van. 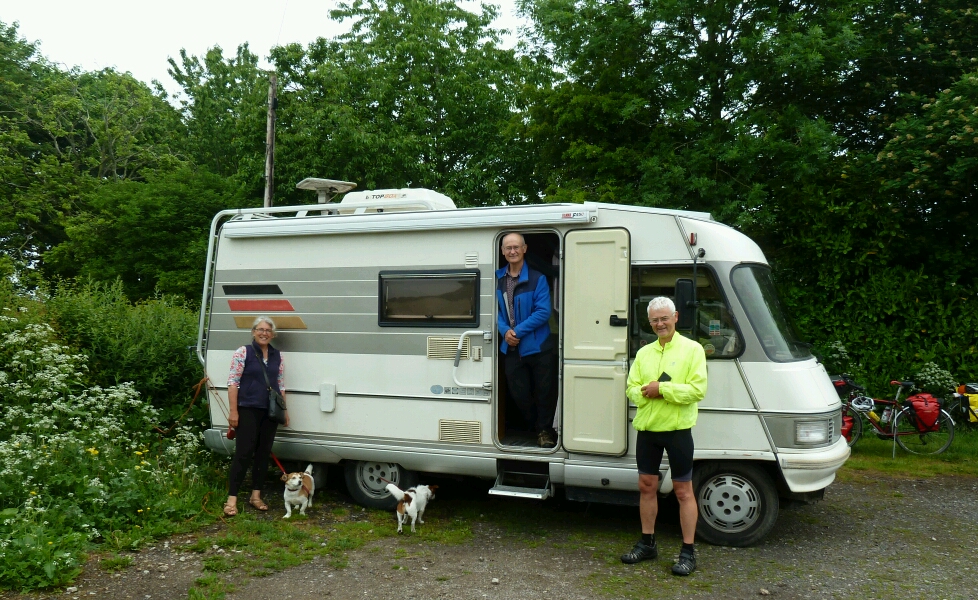 This poses an ethical dilemma – we are doing an unsupported jouirney so still carry our luggage but is it ethical for them to carry the food all day and feed us with their delicious cooking- well we think  so. Tonight absolute luxury as Sue provided two full size towels – absolute luxury after our two miniscule towels we packed to save weight.

We cruised downhill into Penrith- an attractive town and market with established independant shops, and then on towards Carlisle. It was damp and we eventually gave in and put on waterproofs for the first time on the trip. The countryside was green and lush. It is an area much fought over as the Scottish border moved back and forth and there were fortified farm buildings and stately homes. Cows, sheep and a hare in the road 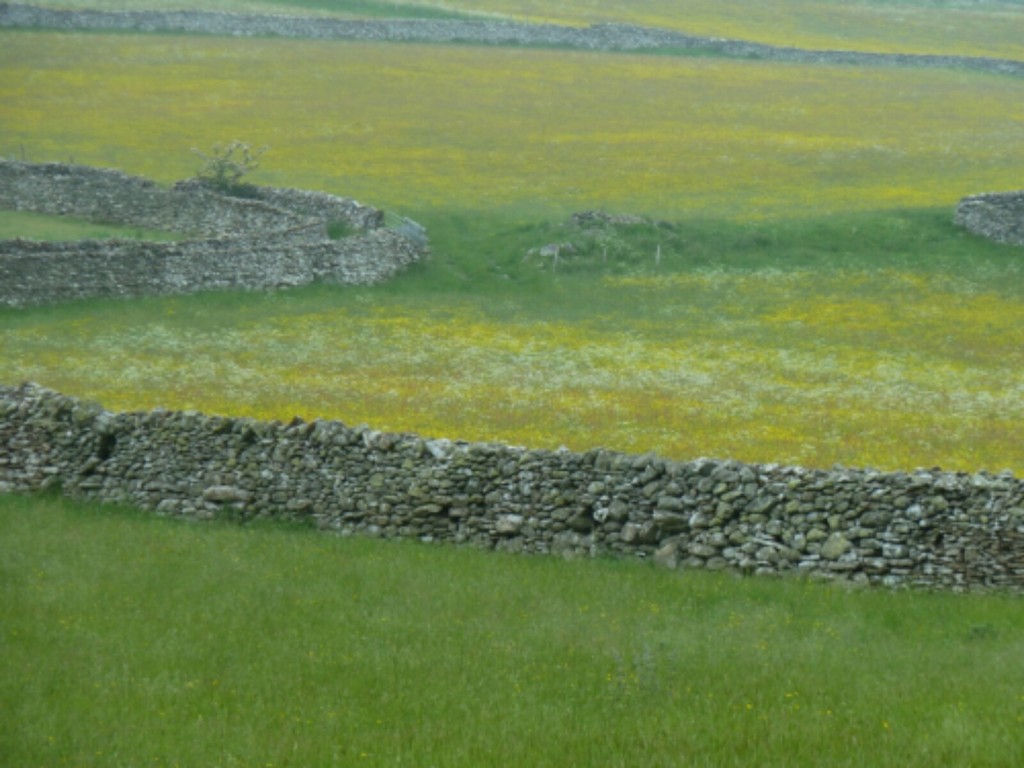 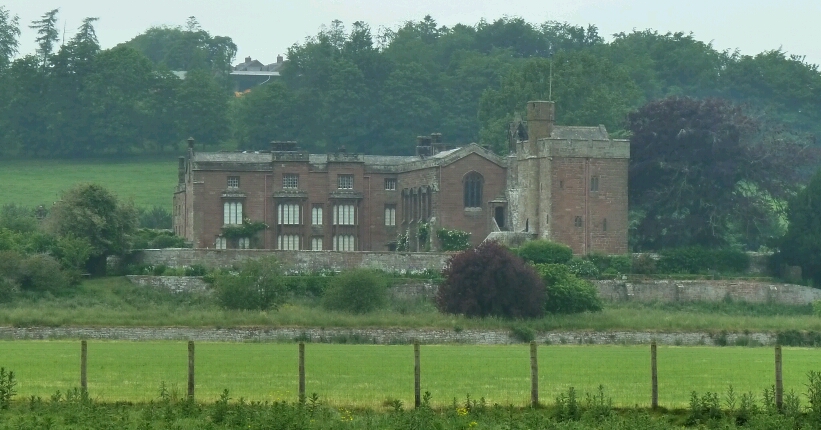 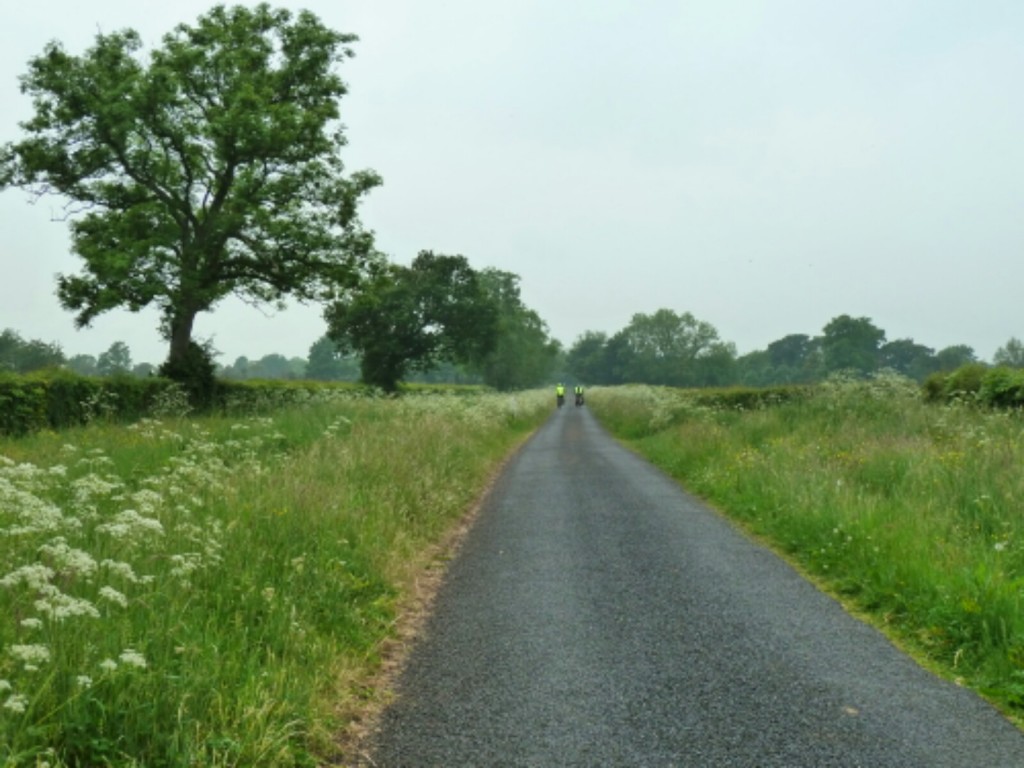 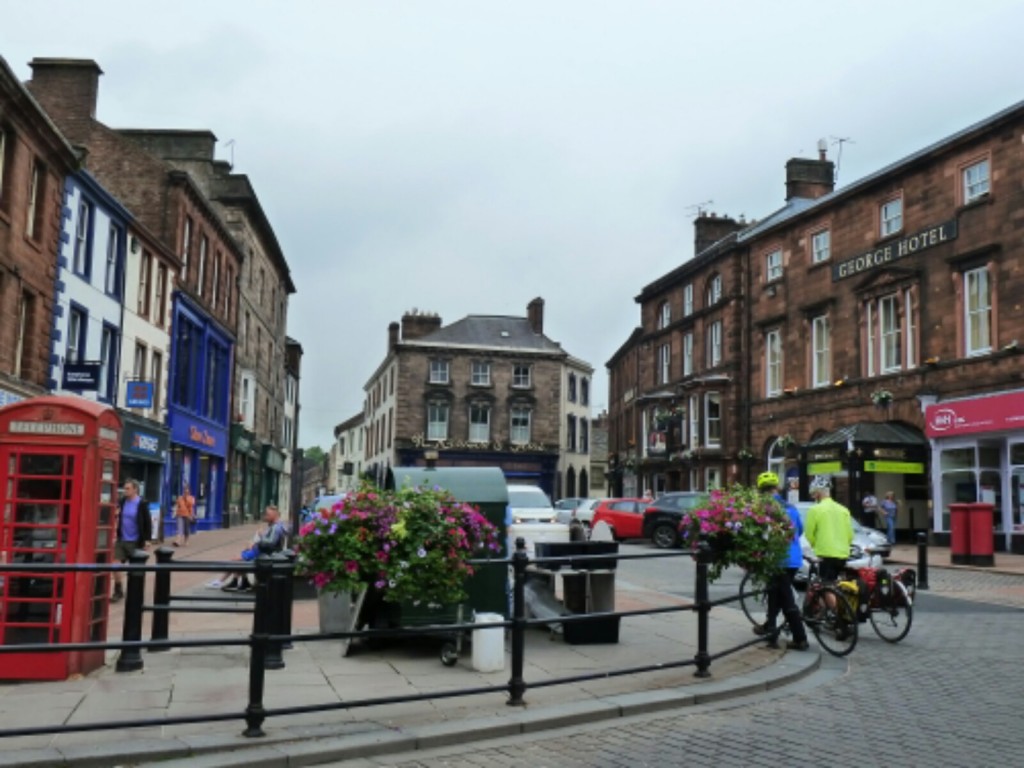 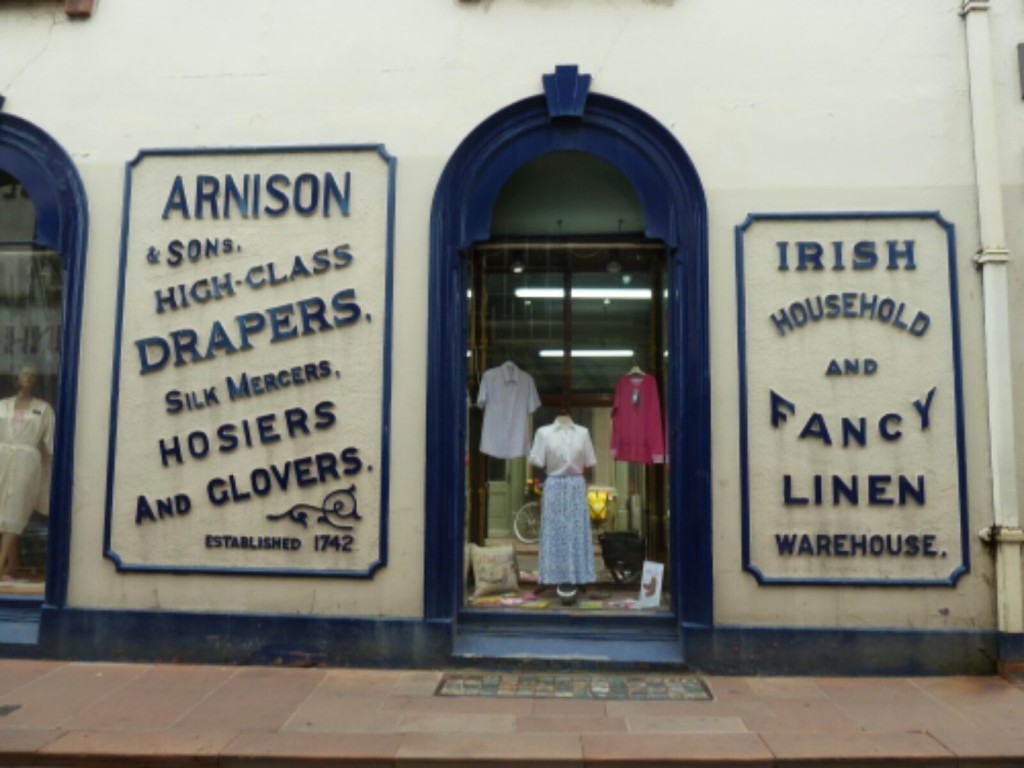 Sue gave us plentiful lunch including her gooseberry chutney and fuelled by this we cycled on to Carlisle along a cycleway along the Cardew. Finding the cycle way through Carlisle was slightly challenging but we eventually did and escaped the town traffic back into small lanes along the Solway estuary. 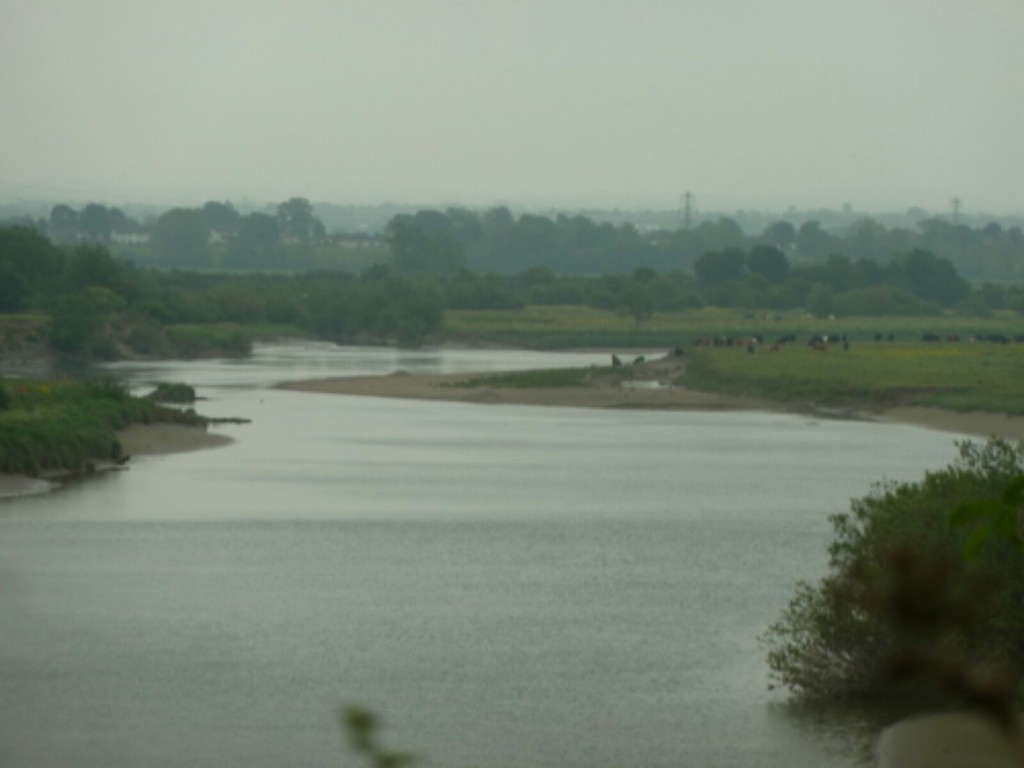 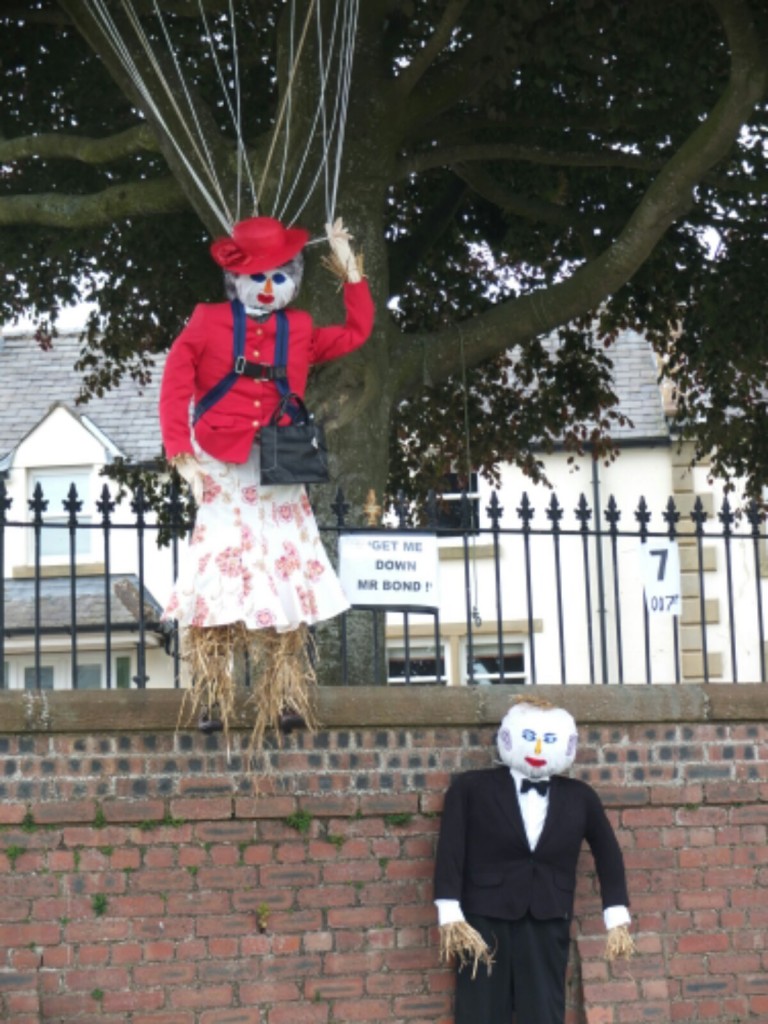 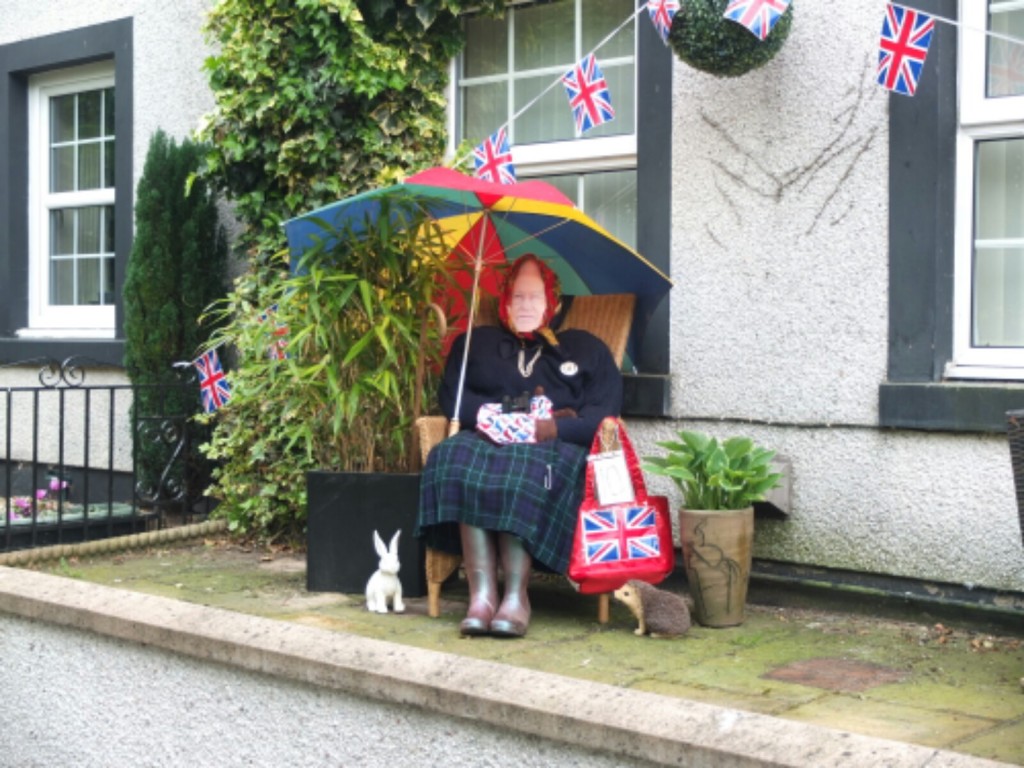 We had to join the motorway service road for the bridge over the Esk, small but with lorries thundering the other side of a fence and then to Gretna and the Scottish border 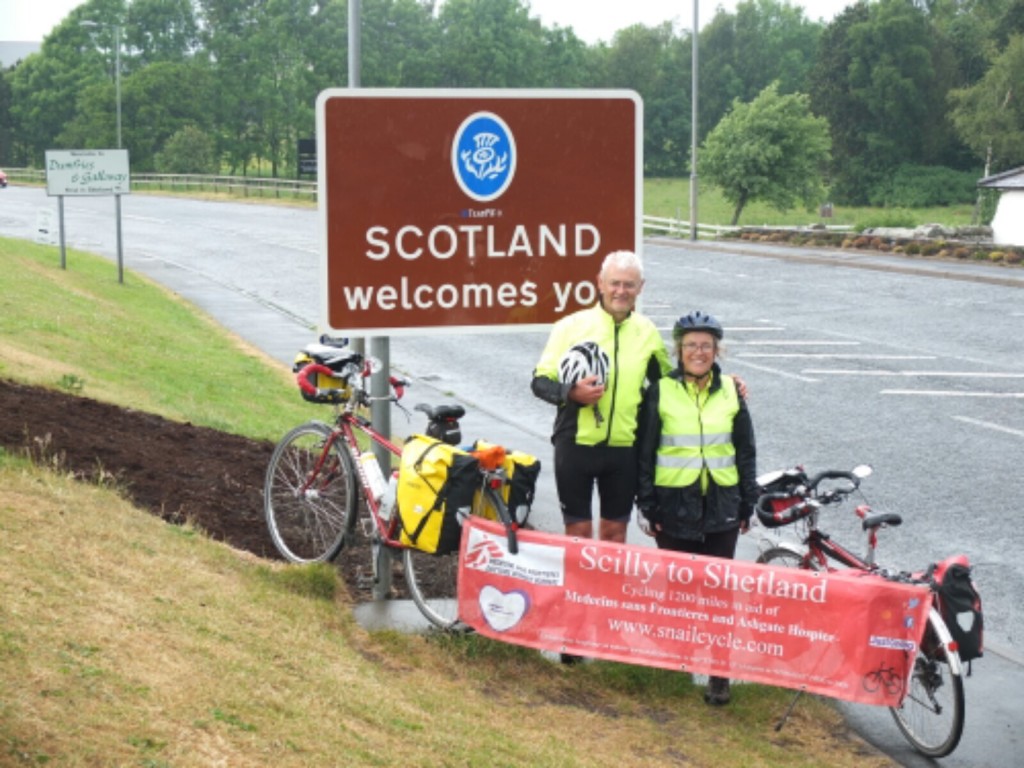 At the Border, part of Britain, depending on the result of the vote 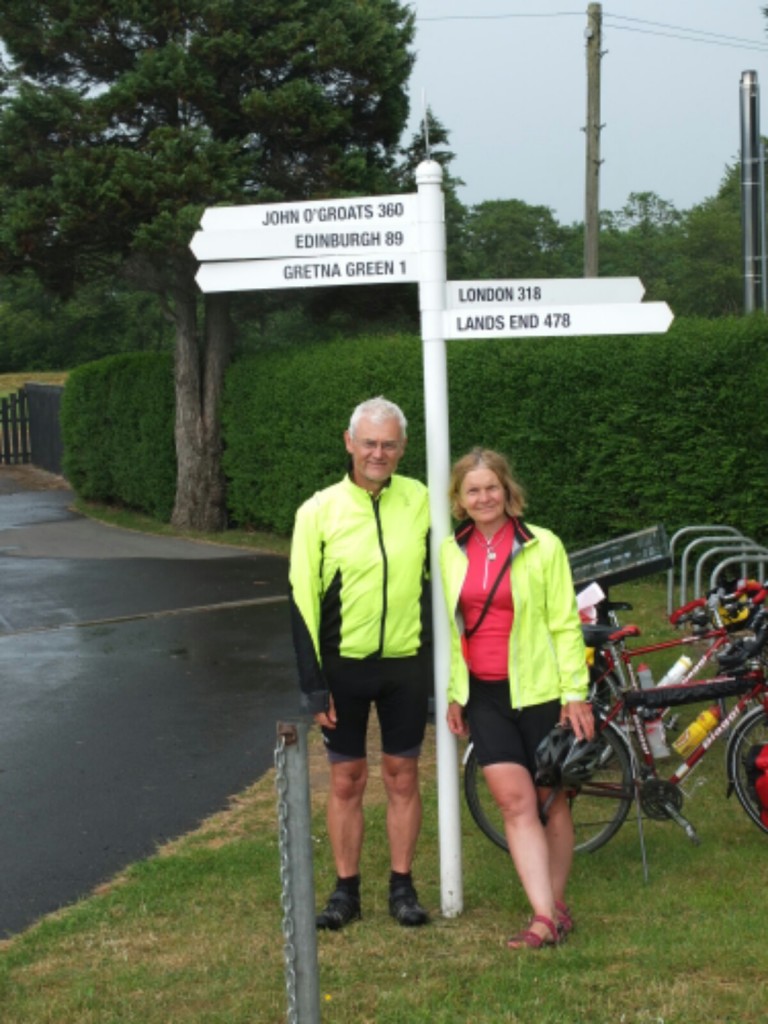 Then on another 4 miles to our campsite. it is called Sir Robert the Bruce’s cave campsite and is allegedly where he hid from the  English and drew inspiration from the persistence of a spider to sally forth and defeat Edward the 1st at Bannockburn and be crowned Bruce the 1st of Scotland. we will visit the cave in the morning, showers and supper were priorities for tonight. 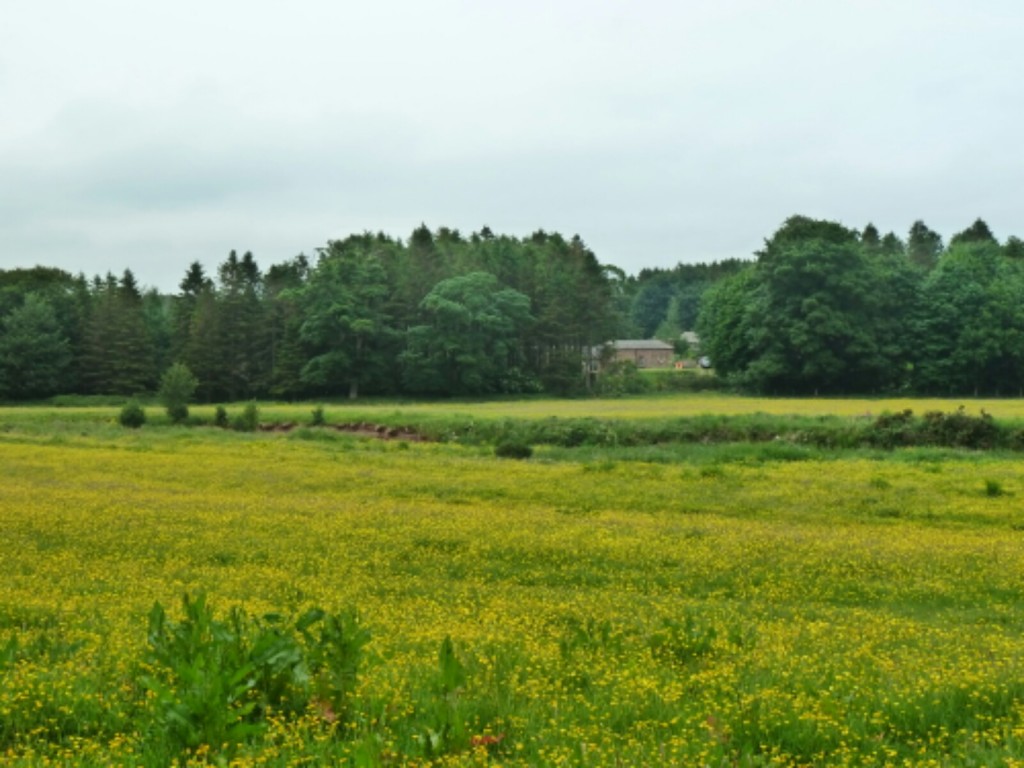 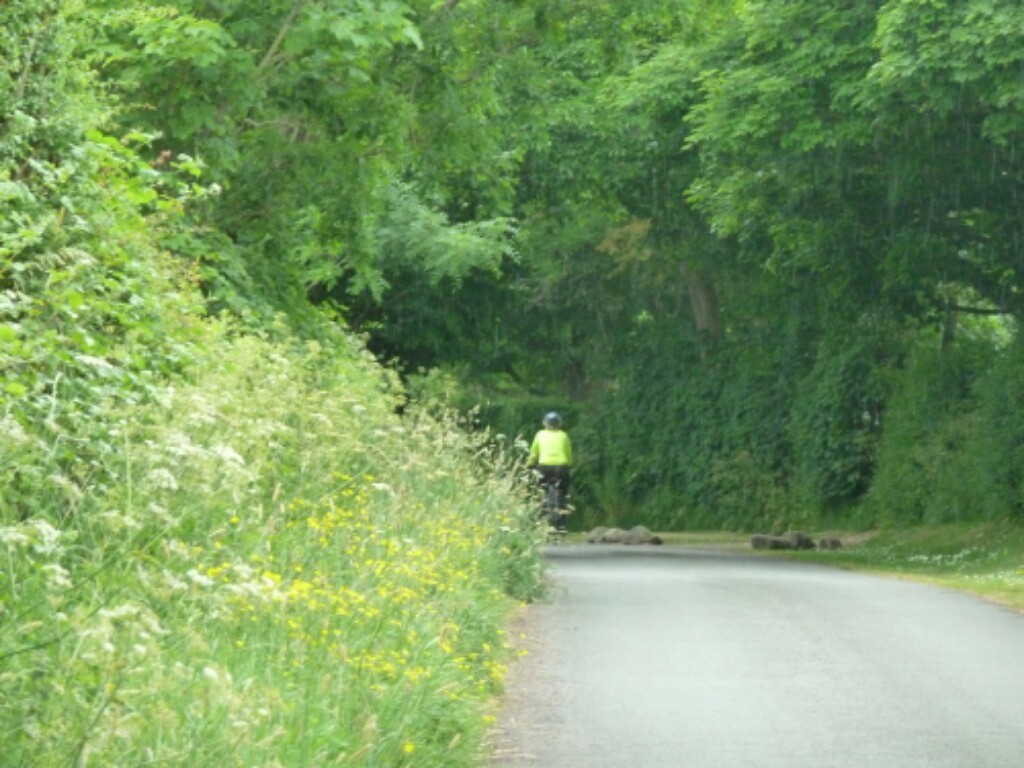 One last task tonight,  Gayle brought two batteries for her camera thinking that they would last for the trip but no charger as it was heavy,  Martin brought his charger but for a different make. With the help of a short length of wire,  some blu tac,  insulating tape and two matchsticks we concocted a device to charge the battery.

It looks deeply suspicious and definitely wouldn’t be allowed onto a plane. With the propensity for lithium ion batteries to burst into flames we have put it in the entrance to the tent and will let you know tomorrow if it works. In the process we have discovered that just crossing the border into Scotland does indeed increase the midge population,  there are swarms of the beasties out there. A good incentive to have a strong bladder tonight.

2 thoughts on “Into Scotland”