Muckle Flugga, the top of the UK

Well we made it!

We had thought that we might take a rest day today before going to the Northernmost point on Unst, in fact the weather forecast looked slightly better for today so we headed off to Hermaness the most northern point , opposite the superbly named Muckle Flugga lighthouse. 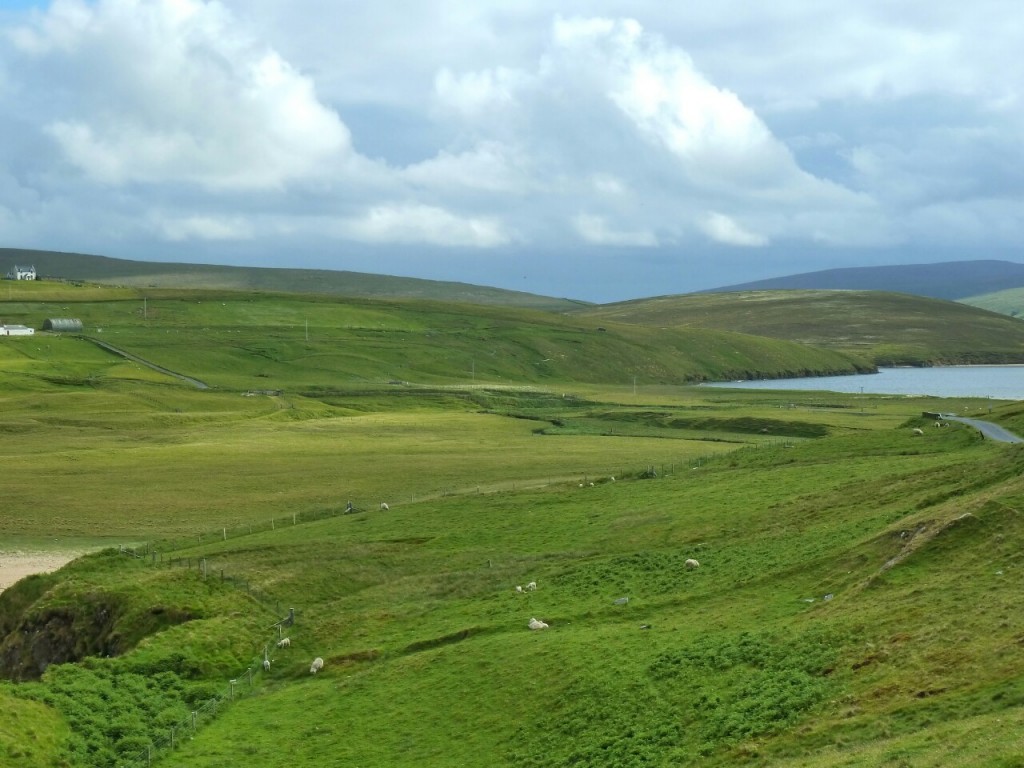 Everyone had said that the wind on Shetland can be challenging- we started with a strong westerly sidewind and made good progress just the occasional gust a bit alarming . We stopped at Baltasound, a tiny village with a shop and Post Office- the most northerly in Britain and people go specially to have their postcards franked there. There are no banks on the island and we were short of cash but the post office is able to supply that as well

We made our way to the National Nature Reserve at Hermaness- a wild headland but with an immaculately maintained path across the heather to allow birdwatchers to visit the cliffs, strict instructions to walkers to stick to the path as some of the birds particularly the Great Skuas are ground nesting. 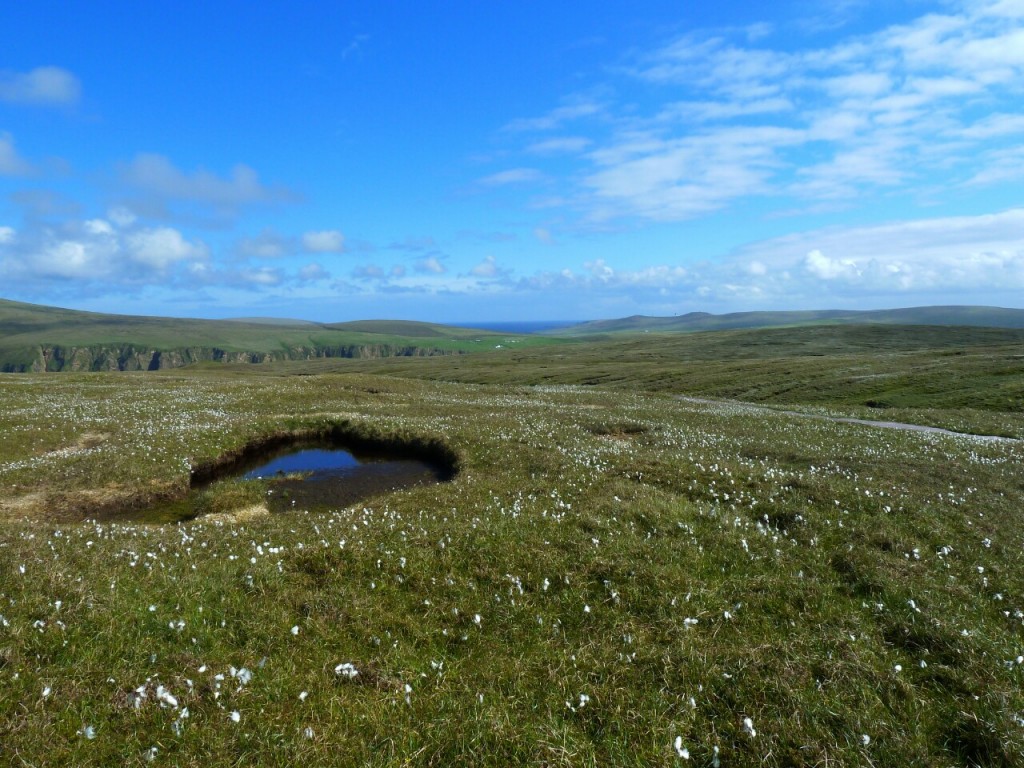 We wondered if a skeleton some yards from the path was a walker who had strayed… probably a sheep. Little rabbits seem to make their homes under the boardwalk. 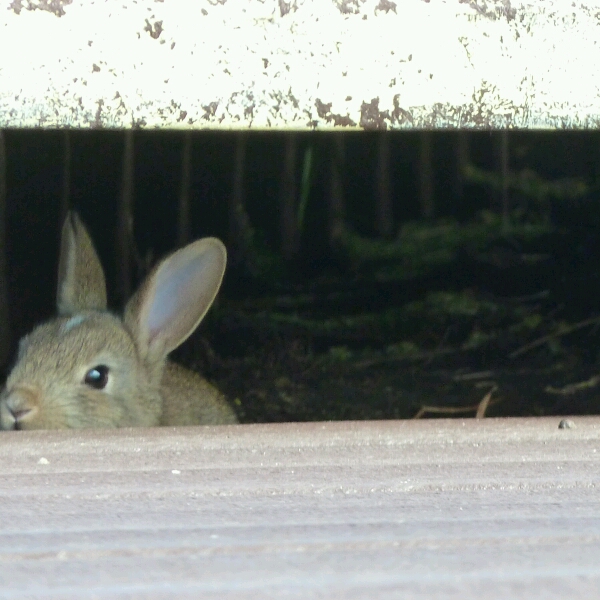 Rabbit hiding under the boardwalk 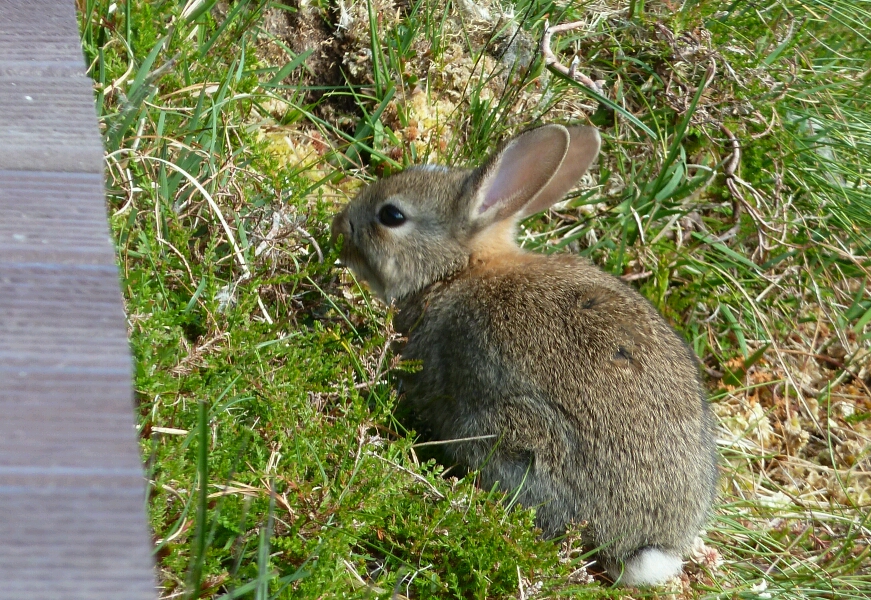 The skuas had been very endangered but there were huge numbers here nesting in colonies on the moorland. They are aggressive birds and feed by stealing other seabird’s food and eggs and are a threat to the puffins . There are warnings that they also attack people who stray too close to the colonies, we saw birds brooding on nests, flying and fighting in the air and many posted on sentinel duty, often flapping their wings and posturing. 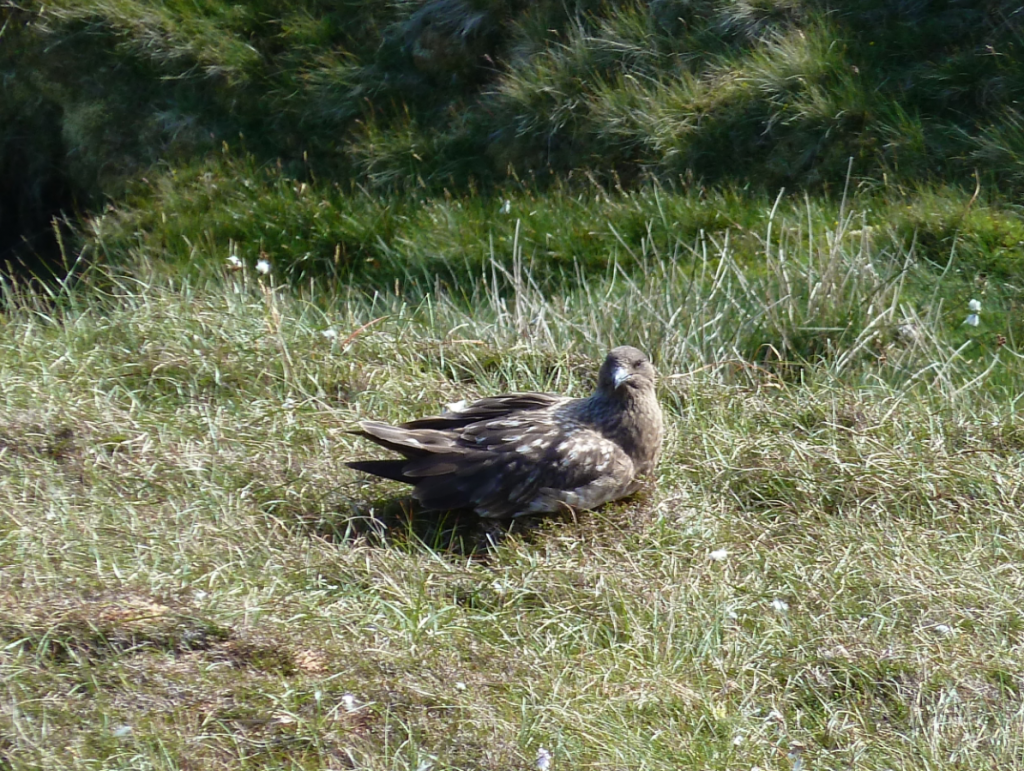 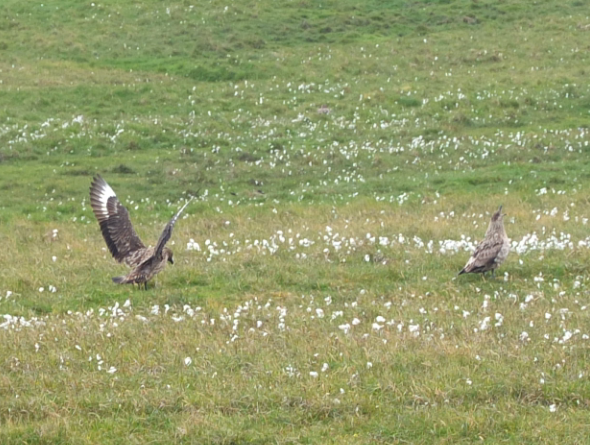 There were puffins flying acrobatically and then diving into their burrows and vast numbers of gannets – the colonies so large that the rocky islands offshore were white with guano. 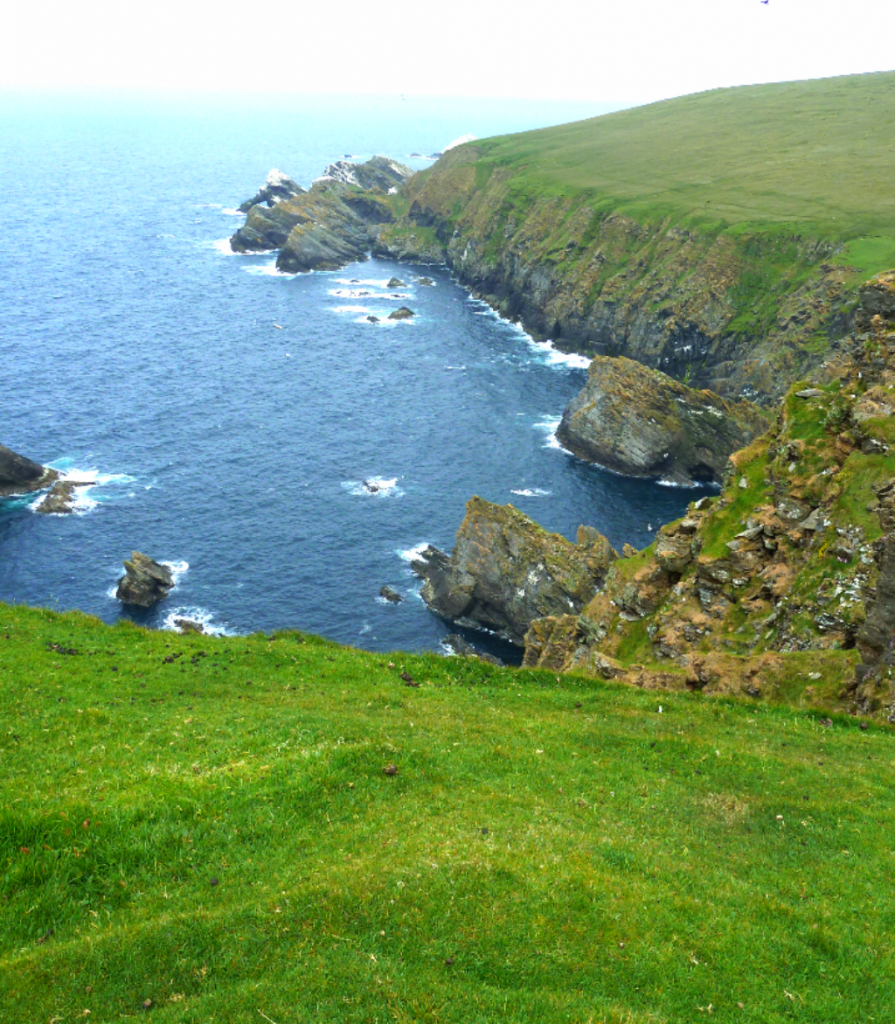 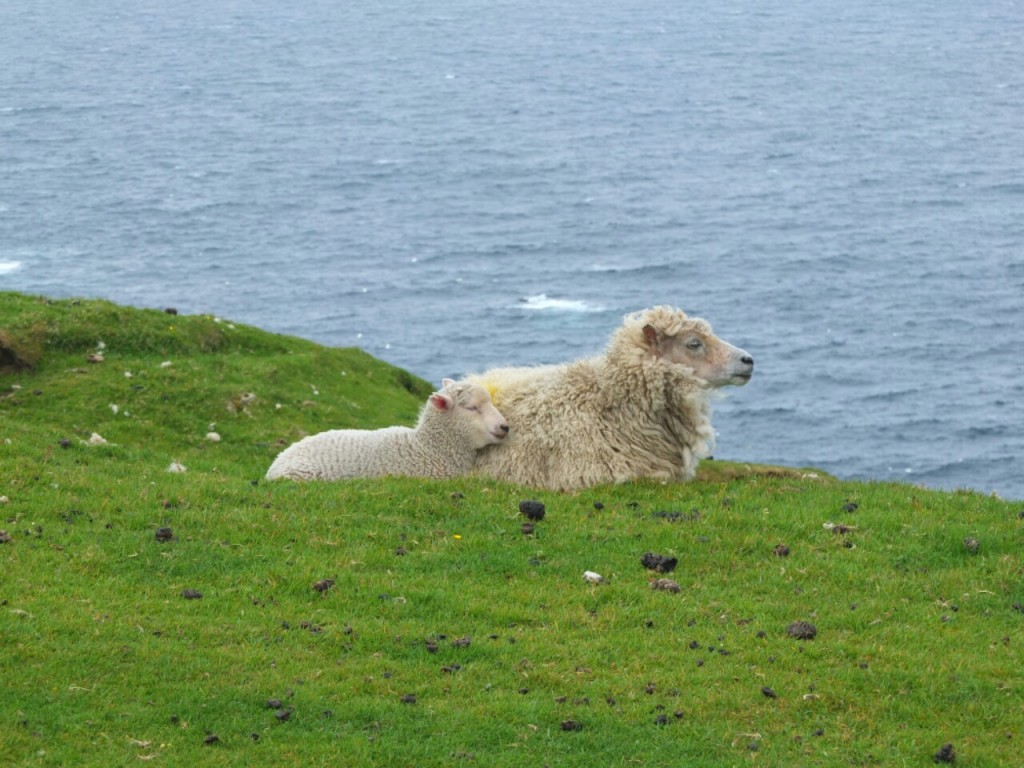 The sheep seemed to like looking out to sea 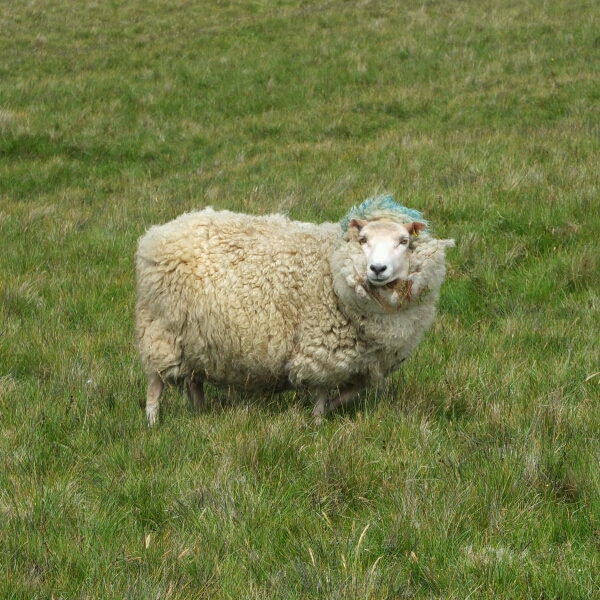 When I am old I shall wear purple…

Apparently in 1970 an albatross appeared,  they are southern hemisphere birds so he was very lost. Anyway, he decided to join the gannet colony and returned faithfully every year, building a nest and hoping to find a mate, until last year, the reserve staff affectionately named him Albert Ross.This is the second year he has not been spotted so unlikely that he will come back now. 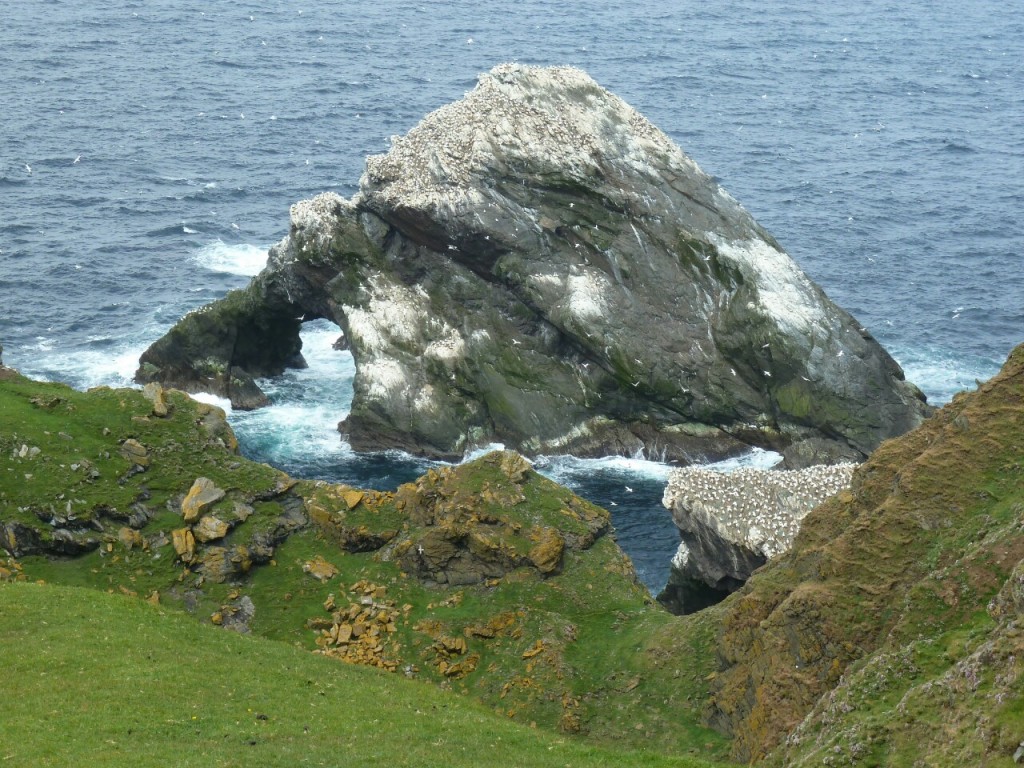 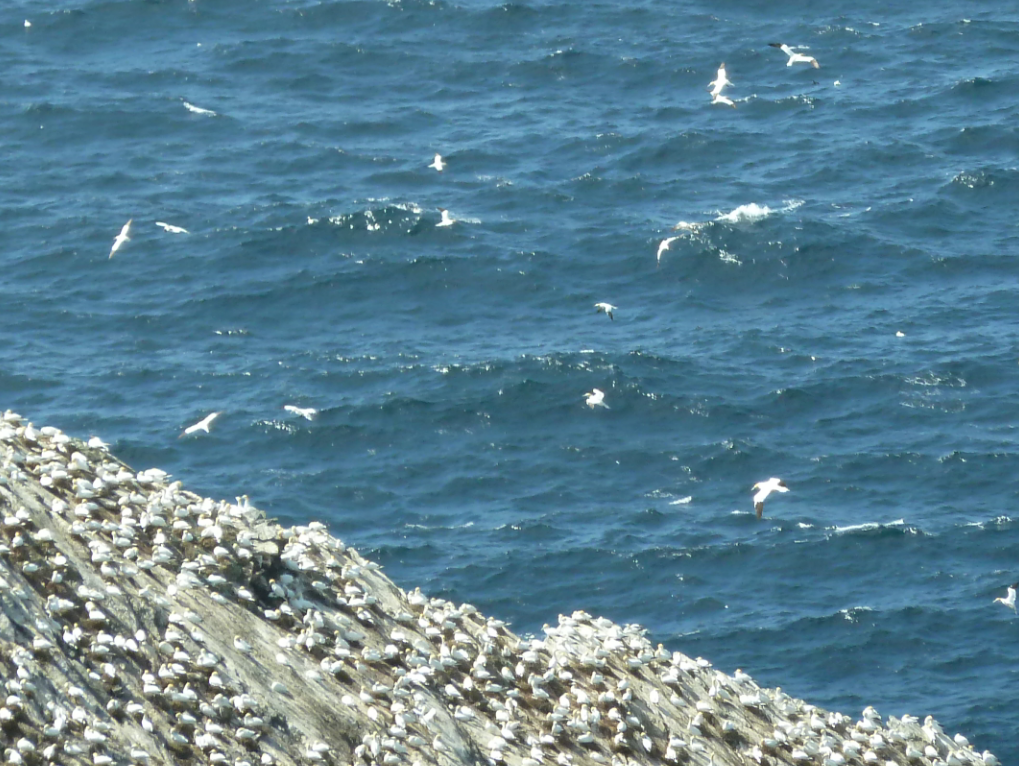 Once we reached the far side of the headland we contoured around to the most Northerly point- a sign proudly announced that there was no land between us and the North Pole. 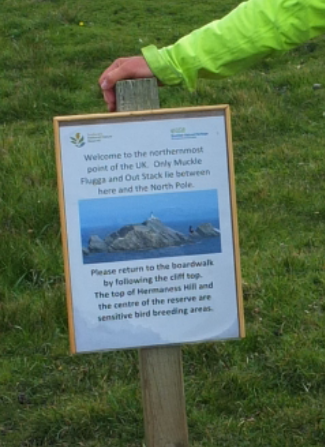 We thought a point a bit further on was actually a bit further north so set off across the tussocks but an angry skua, maybe tasked by the nature reserve staff to keep an eye on trespassing walkers made it clear he would not easily let us proceed.  We decided that for a few hundred yards we would accept the signpost’s position. 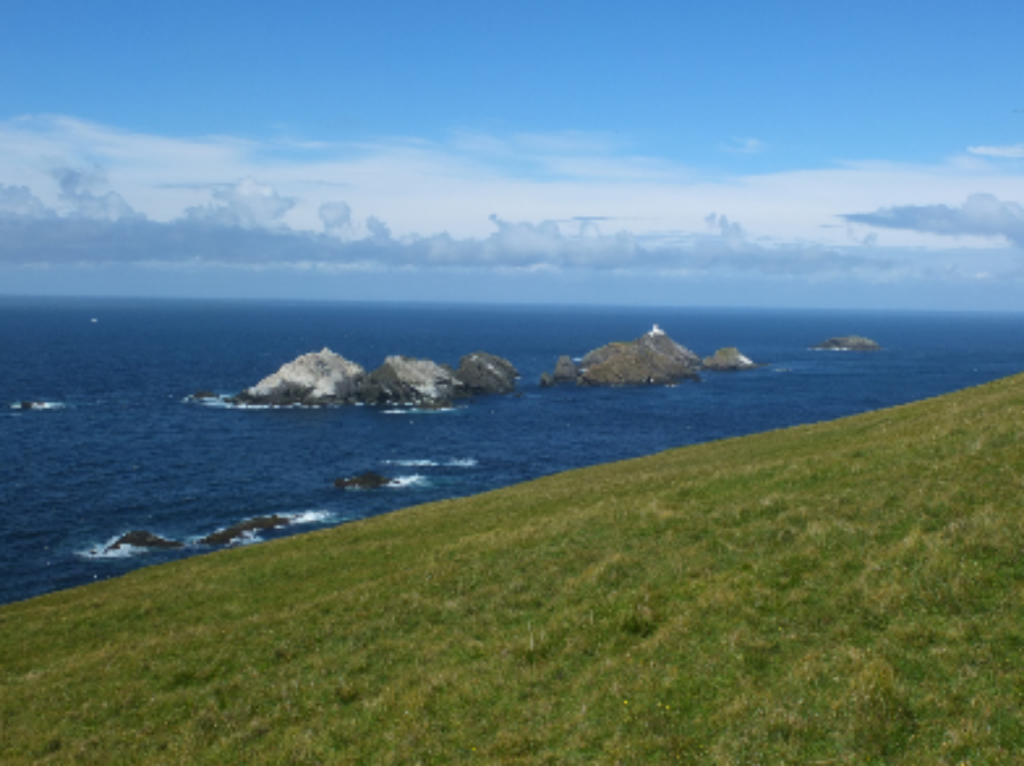 We took our obligatory shot with the banner and then sat down to lunch and mutual congratulations. 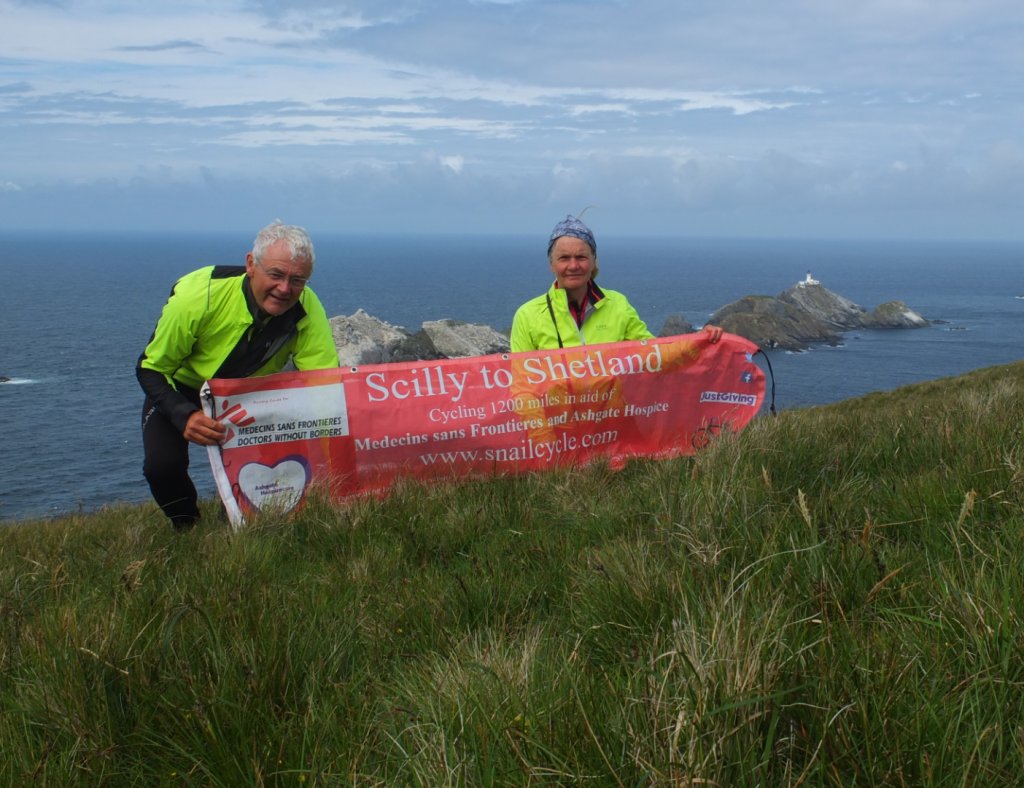 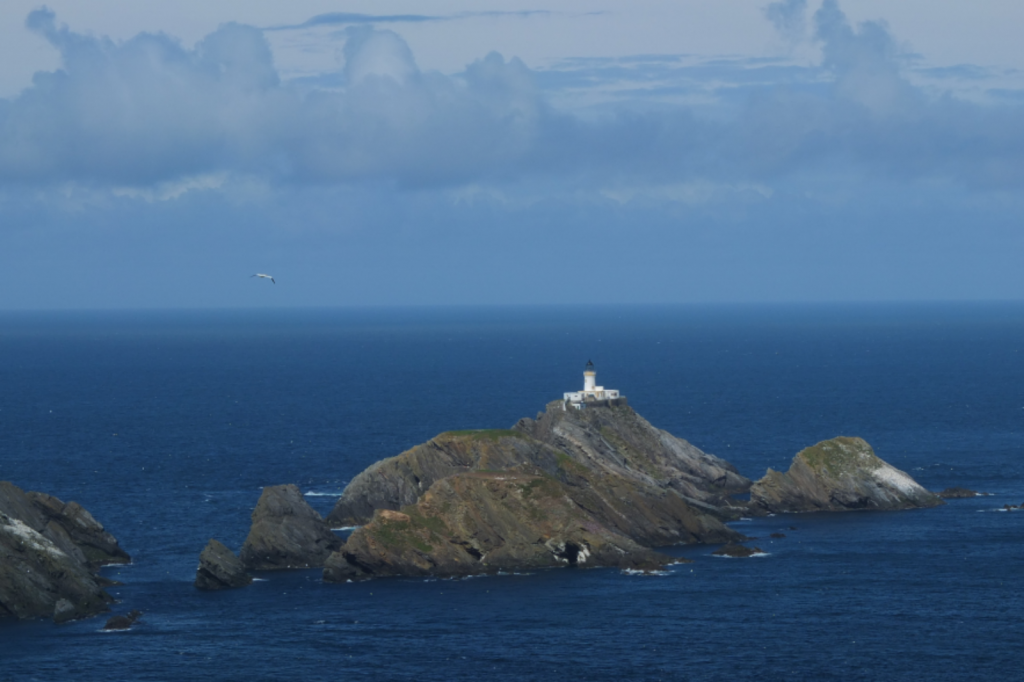 We made our way back to the bikes, visited the visitor centre at the reserve, unmanned but with good information and a kettle to make hot drinks. 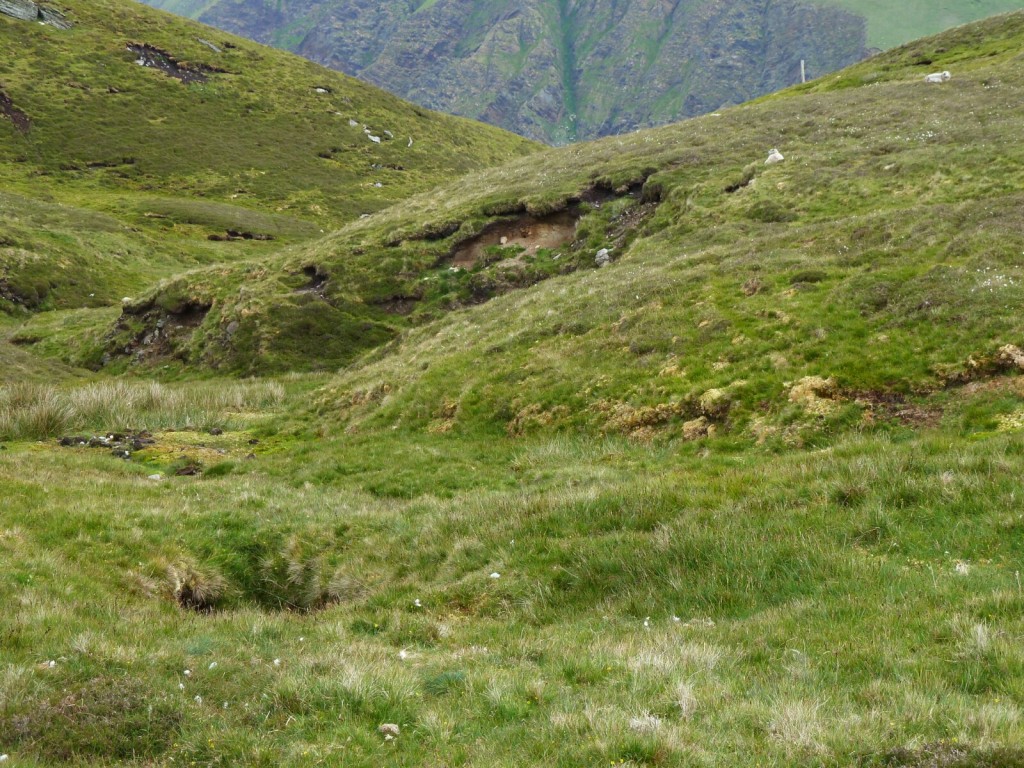 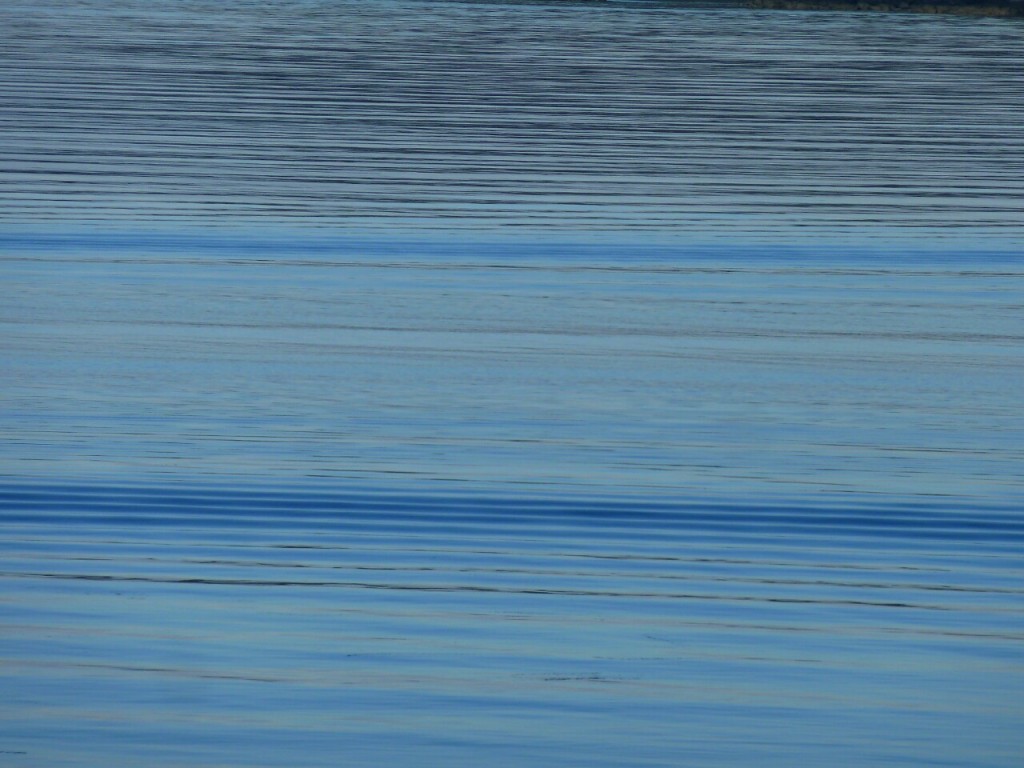 Martin reminded us that we had said we would be visiting Skaw- the most northerly habitation in the UK (now that the lighthouse at Muckle Flugga is unmanned). He confidently predicted that it wouldn’t take long and didn’t go over the obvious hill – in fact it took us up the steepest piece of road we have encountered on the whole trip and despite not having any luggage we both had to push.

Skaw itself is a single farm reached by a remote single track road over the headland,  the most northerly road in Britain, worth the effort as the sun and a rainbow came out at just the right moment to celebrate the end of the trip. 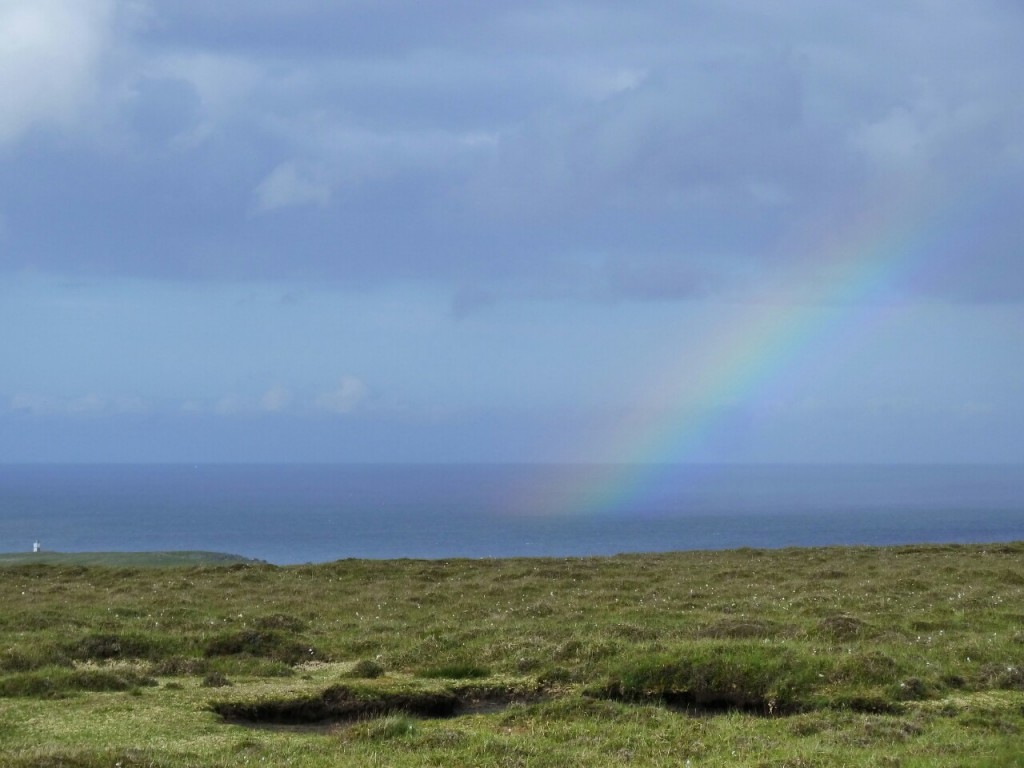 The isolated farmhouse on the promontory was once home to Walter Sutherland who until his death in 1850 was the last person to speak Norn,  an extinct North Germanic language which was spoken in the Northern Isles and Caithness before it’s gradual replacement by Scots, mainly over the 1600 and 1700s . 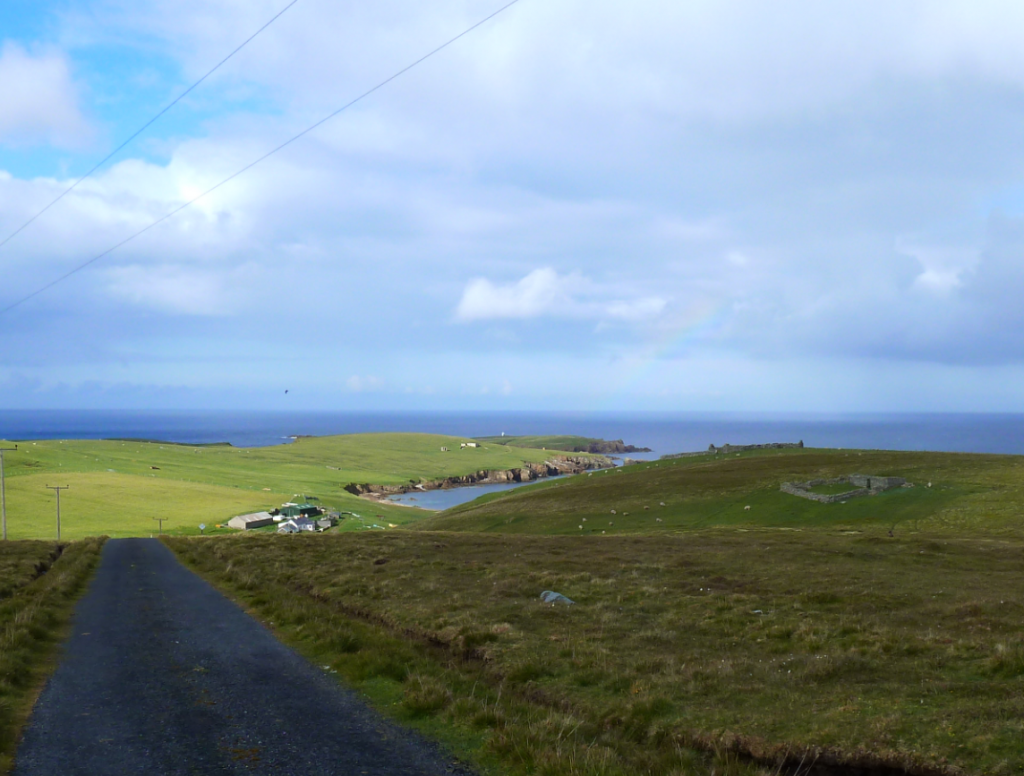 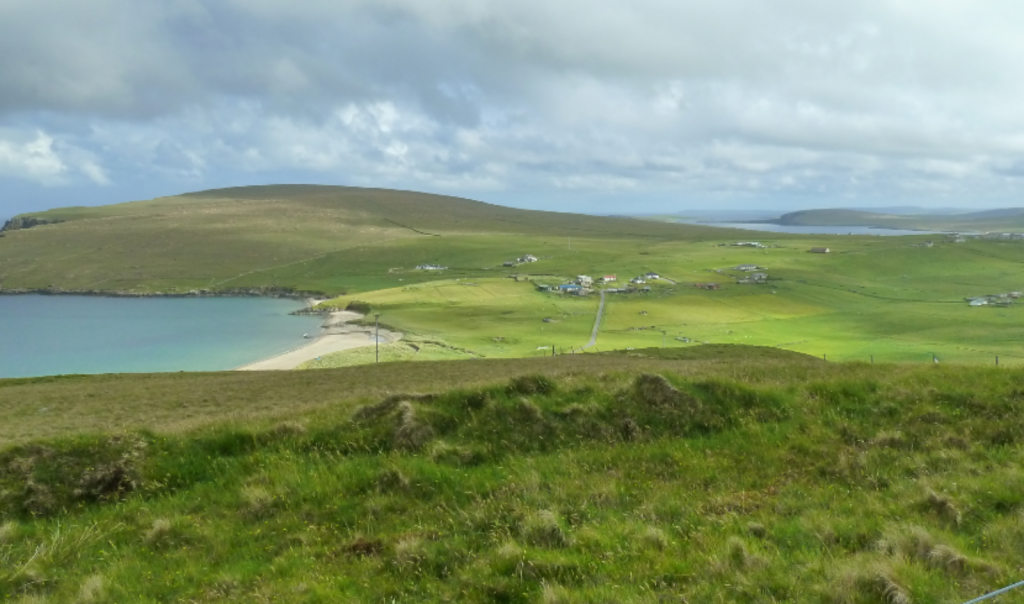 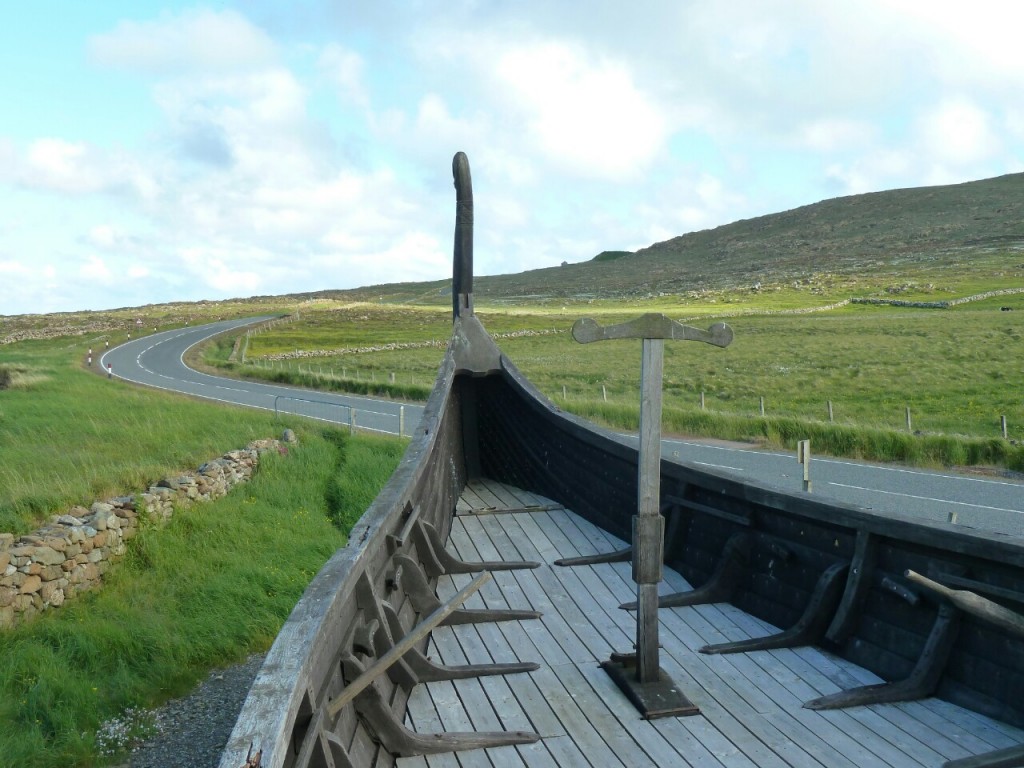 There is clearly a strong community spirit on Unst. Many facilities, including the hostel and visitor centres, are immaculate and well equipped and are open and unmanned with honesty boxes.  The Unst Bus Shelter illustrates the possibilities this opens up, a dry warm haven complete with comfy chair, books, games a can of beer and a visitor’s book full of appreciative comments. 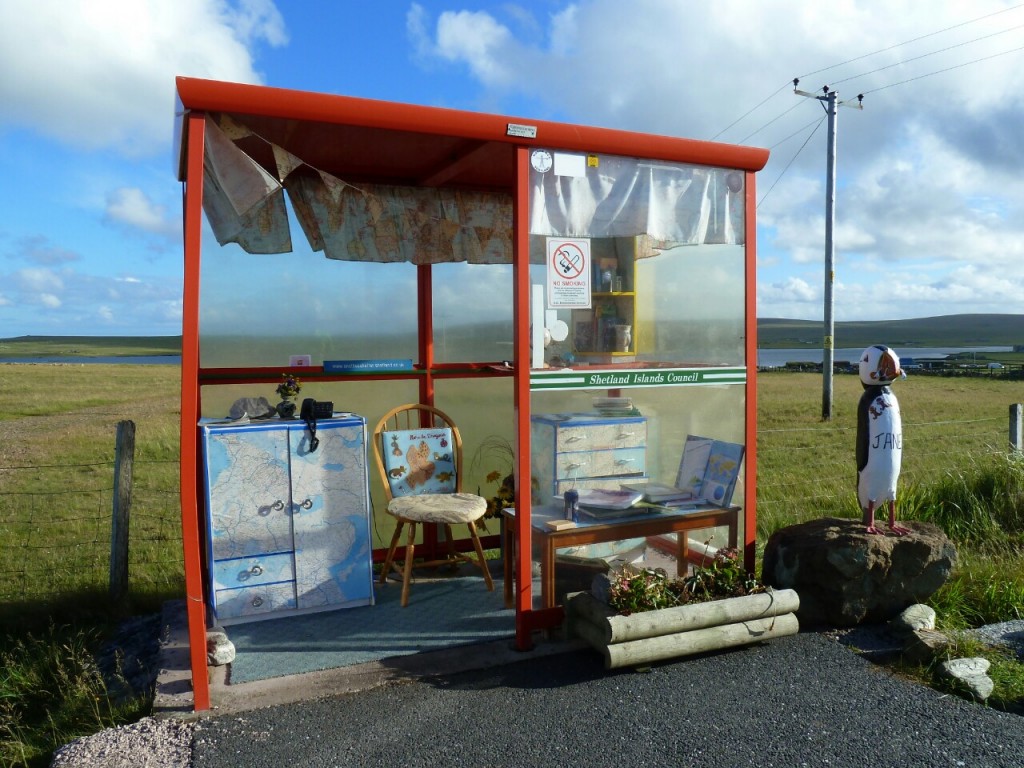 With duty done we set off back , by now the wind was a fierce 20mph southwesterly headwind, ironic as we had to battle Northerly winds all the way up the UK. We had to pedal hard downhill at times and take turns to be in front taking the full brunt of the wind. We were tired but pleased when we arrived back at the campsite , job done.Tonight it is deluging so we may just be forced to have a lie in tomorrow . 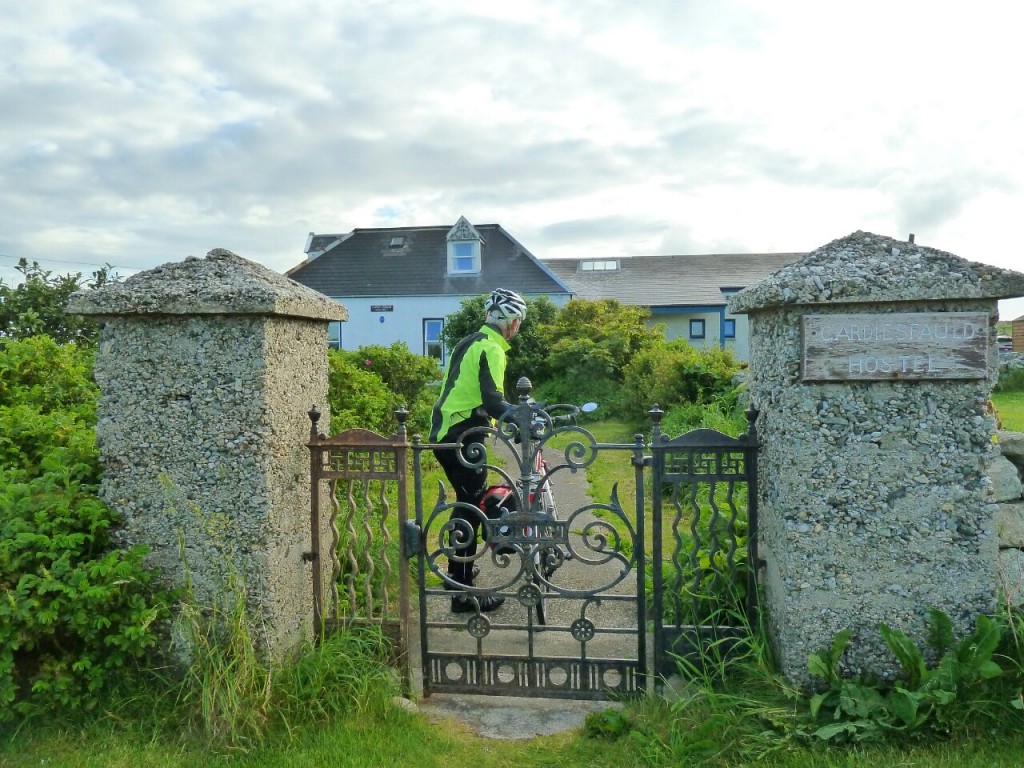 So from Horse Point, St Agnes in the Scilly Isles to Muckle Flugga, Unst in the Shetlands.  It has been an amazing trip. Despite the population density of Britain,  we have travelled consistently through beautiful unspoilt countryside,  often completely away from traffic and all but the smallest settlements. The weather has blessed us, we have been drier than we might have expected, it has been cool, only one day when we sought shade for lunch.

It has felt different cycling to fundraise, more pressure to get on every day, no option to give up, and doing the blog has been really fun but also an additional task each evening. We have felt so supported by all the messages and feedback and we thank you all for them. We have also been overwhelmed by your generosity, you have contributed about £2500 to MSF and £1200 to Ashgate Hospice.

We will leave the justgiving page open for a while. Many of you have fed back that you enjoyed the photos.  We did wonder about using them to make a Britain End to End 2017 calender, using the the best photo from each 100 miles and putting a small profit from each calender into the fundraising . As a market research question, would you tell us if this might be something you would consider as part of your Christmas shopping?
We are going to potter slowly back down Shetland and then ferry and train home. It will feel very odd getting into a car again….

10 thoughts on “Muckle Flugga, the top of the UK”